The Sexual-Romantic Politics of Star Trek

I am a big fan of Star Trek. Not the original series — I have to admit, I’ve never watched the original series on purpose, though I suspect I soaked up a lot of it accidentally as a kid, since one of my brothers went through a phase of heavy infatuation with the reruns. But I am a big fan of The Next Generation, which I’ve been watching lately, and I’ll also tip my hand and admit that I’ve watched the full run of Deep Space Nine and Voyager.

So I have seen me some Star Trek, and I love it. But I dislike Star Trek romance, and I hate Star Trek sex. 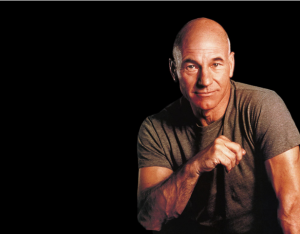 Let's be honest: this is why I watch TNG.

The sexual politics of Star Trek are pretty blunt: the men run the technology and the ship, and the women are caretakers (a doctor and a counselor). Note the sexual tensions on the bridge of the Enterprise: the women, in skin tight uniforms, and with luxuriant, flowing hair. The men, often balding, and sporting some sort of permanently attached computer auxiliary. This world metaphorizes the fantasies of the geek dude, who sees himself in the geeky-but-heroic male officers and who secretly desires a sexy, smart, Deanna or Bev to come along and deferentially accept him for who he is.

True, that — though the picture is improved somewhat by Voyager, which has the rather awesome Captain Janeway, as well as by Deep Space Nine, which featured two empowered female officers on the bridge crew. 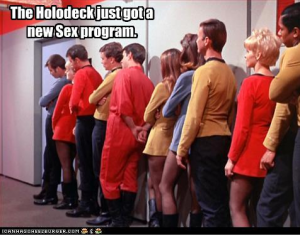 And by “interests me,” I mean “repels me.” Because, by and large, the way Star Trek depicts romantic relationships just suuuuuucks.

Now, there are three kinds of Star Trek relationships: the pleasure planet sexfest, the one-episode relationship, and the multi-episode romantic arc. Let’s call these “the squicky,” “the quickie,” and “the sickie,” shall we?

“The squicky” is what Star Trek characters do when they have a little time off: they visit “pleasure planets,” like the famous Risa, and while it’s usually not made explicit, the general idea is they have a lot of sex with pleasure-planet denizens who like sex and belong to sensual cultures, which makes it not at all like soldiers visiting whores in port cities. Not at all. 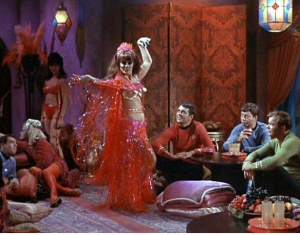 When there are no handy pleasure planets in sight, there’s always the Holodeck, where crew members can create programs that allow them to have anonymous hook-ups with make-believe people. While I applaud such creative uses of the Holodeck, I feel obliged to note that most of the time, “relaxation” in the Holodeck seems to be equated with “Caribbean-type beach settings and bimbos wearing bikinis under see-through vinyl raincoats who serve me drinks.” So that’s nice.

But okay. These aren’t romantic relationships, they’re squickies, and I’m going to pass right over them, because even though they make my skin crawl, who am I to judge the fantasies of my favorite Trek characters? And anyway, this is a romance blog, and I want to talk about Trek romance.

The vast majority of Star Trek relationships are quickies, and as best I can tell, these episodes are all written by aliens. Or possibly fifteen-year-old boys. Here are the things that quickie relationships on Star Trek are not, ever: (1) genuinely romantic, (2) genuinely sexy, (3) genuine.

What quickie relationships are is doomed. Dooooomed. Also, (most of the time) sexist and insulting and uncomfortable to watch. 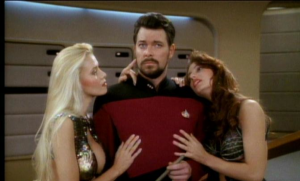 Usually, quickie-relationship episodes are a vehicle to confirm the prowess and general awesomeness of the series’ Designated Lothario Character (DLC for short), who gets at least one — sometimes two — sex-related episodes per season. On The Next Generation, the DLC is Riker. (shudders) On Voyager, it is Tom, at least until he gets involved with B’Elanna (double shudder). On Deep Space Nine, it’s Dr. Bashir.

All of these men are awful.

The thing is, the DLC does not have to be attractive or to possess sexual charisma. He is the Designated Lothario Character because the series creators say so. Swoon, women! Swoon! We command you to swoon!

Okay, sorry. Getting carried away. So the DLC gets involved with some hot alien woman, feeds her a few distractingly cheesy pick-up lines, has soft-focus sex with her, and then… <dun dun DUN> the choose-your-own tragedy occurs. She will (a) die, (b) betray the DLC, or (c) sacrifice herself for the DLC / her people / her difficult-to-sympathize-with yet necessary-to-respect religious beliefs. Then she disappears from the universe of Star Trek, never to be heard from again. 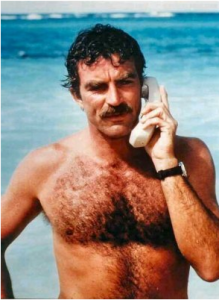 I just liked this picture.

I understand that forty minutes is not a large canvas on which to explore short-term romantic relationships, especially given that these episodes have to have a non-romantic plotline, as well. But nonetheless, it seems to me that the Star Trek writers were never willing to do anything interesting with quickies. They didn’t develop character, explore issues, or raise questions. Quickies were the weakest of all episodes, often eye-rollingly silly, and I can’t help but think this is because the writers of Star Trek were somehow incapable of taking sex — and romance — seriously as subjects worthy of their attention. It’s like they were perfectly willing to explore all kinds of issues of interest against the backdrop of space-as-frontier — power, responsibility, war crimes, race, religious difference, empire, ambition, cultural difference, self-control, identity formation, the meaning of “life,” the value of life, and so on — but when it came to love, they defaulted to a formula that had all the sexual-romantic sophistication of Magnum P.I. or Three’s Company.

And I think this is even more obvious in the ways that Star Trek series, on the whole, failed to develop either interesting and believable romances or long-term, committed relationships among crew members — a failure that seems all the more disappointing in the context of how remarkable the series were at developing other kinds of long-term character-development arcs.

Take The Next Generation. We get two sets of men and women on the Enterprise who have a romantic past: Jean-Luc Picard and Beverly Crusher, and William Riker and Deanna Troi. Every now and then, these relationships get flung into an episode as Drama Fodder, but for the most part they go nowhere. They remain bits of uninteresting backstory, to be manipulated at will for the purposes of plot, but never to get resolved or developed in any substantial way. We get Geordi, who’s apparently no good with women and is therefore not allowed to have them. We get Riker bedding anything with two legs and a rack. Miles and Keiko are married, and their marriage consists mainly of whiny arguments over unpleasant-looking replicator dinners. And…that’s all. 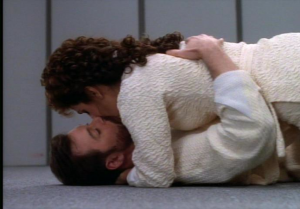 That’s all?! A thousand people lived on that ship, and none of them ever fell in love in an interesting way? None of them had marriages worth a multi-episode character arc? COME ON.

The message we get on The Next Generation, again and again, is that love is too complicated for the busy, important people of the Enterprise. Will gave Deanna up years ago because he needed to pursue his ambition. He is too busy and important for love. Captain Picard falls in love with a lieutenant stellar scientist on one episode, sends her on an away mission in which she nearly gets killed, and then dumps her because he can’t deal with how overwhelming it would be to continue loving her and risking her life as captain of her ship. His love is neither liberating nor transformative; it’s a burden he can’t afford. Never mind that he loves his friends on the crew and risks their lives all the time. That’s different, because he’s not boning them. Only love is too complicated to risk in the world of Star Trek.

When we do see characters fall in love on Star Trek, the show’s creators often give them a single conflict and then bludgeon us over the head with it for numerous seasons. In Voyager, Captain Janeway and her first officer, Chakotay, fall for each other gradually, but their love is Forbidden because she’s the captain and he’s an officer (and also he’s a rebel and she’s Federation, but that’s a moot point since they’re in the Gamma Quadrant), and their love remains tediously forbidden for season after season. Tom Paris and B’Elanna Torres love each other, but they fight all the time because Tom is a breezy Designated Lothario, and B’Elanna is a half-Klingon moody bitch. 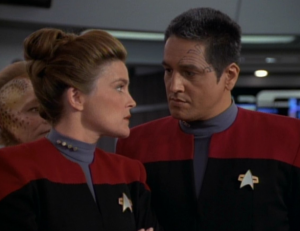 I can't love you until your hair is smaller.

What horks me off about this is that Star Trek had so much potential to be wonkomantically wonderful. It’s set in space. People are trapped together on vessels for long periods of time, working under stress in confined quarters. There are lots of interesting alien races cohabiting. There are significant cultural, economic, political, and ethical differences to cope with. There are androids, for fuck’s sake. Can you imagine a setting more ripe for wonkomance? Star Trek could’ve used sexual and romantic plotlines to mess with its characters’ heads, much as Battlestar Galactica did, but instead it mostly recycled old, stale heterosexual chestnuts and expected us to eat them.

When I watch The Next Generation — a show that began airing 25 years ago — there’s so much that still feels fresh, so much that is gripping despite the passage of time. But the sexual-romantic politics of the show were old-fashioned before it even hit the airwaves, and these days they’re downright embarrassing.

They don’t age well, those chestnuts.

28 Responses to The Sexual-Romantic Politics of Star Trek