Amber: Hi Carolyn! In your Disillusionists series, the character’s biggest weakness is turned into a superpower. Can you describe briefly how that works and then more importantly HOW did you come up with that totally original awesomeness?

Carolyn: Hey! Thanks so much for having me here! And for that question, which is so kind and makes me sound way smarter than I am. Basically, my characters are debilitated by some neurotic quirk. My main character Justine, for example, is full of fear (about health issues). Luckily, Packard, the devious, tortured and totally hot mastermind, figures out a way for Justine and her basketcase cohorts to weaponize their weaknesses, zinging it into others.

The way I came up with it is just from real life. You know how people can kind of use emotions as weapons? (Like guilt?!?!) Or, have you even hung out with somebody who is paranoid or uptight, and it rubs off on you? Ever hung out with an energy vampire? Emotions are kind of weapons. That was partly the seed of it.

Amber: If you were on Packard’s dream team, what would your superpower be? And this one is crucial: what would mine be? (If you’re going to say “fails at blogging and interviewing thus leading to the total disintegration of the interwebs,” then you might be right.)

Carolyn: LOL. My superpower would be slight OCD tendencies. What criminal wouldn’t be thwarted by having to go back home and check if they left the oven on multiple times? Now, what would the Amber Lin power be? How about an overly vivid imagination, full of fabulously torrid plotlines. Why ever even leave the house? What do you even need with reality?

Amber: Annika Martin. Who is this girl and why is she so funny? Also when is the next book in the series coming out? Also, you WISH we were dead, motherfuckers. In Latin.

Carolyn: Okay, you totally made my day with mentioning that tattoo motto. Nobody has ever said anything about it, and it’s totally one of my favorite parts of the book. (For the audience at home, Annika Martin’s series is about hot bank robbers who kidnap this girl who then joins the gang. Basically, they have smutty ménage sex when they’re not out robbing banks. Anyway, they get matching tattoos. Later, they decide to add that saying in Latin.)

Amber: I would like a set of three hunky bank robbers of my very own, but I feel like, what are the odds? Mostly because I’m not a bank teller. What is an equivalent sexy-dangerous-foursome happening that might come upon an author and what would their god names be?

Carolyn: Amber, I’m picturing you in a coffee shop with your computer. You’re working away, minding your own business. It’s laundry day, which means you are wearing your most sexy underwear set underneath your writerly sweater and jeans. Not that that detail will become important later. Ahem. Anyways, some roguish fugitives come in, all scruffy and hot, but they are innocent fugitives who were wrongly framed. They want free coffee and donuts, but they’re not sure what to call what they’re doing. It’s not a stick-up, not a burglary. They need just the right word!!! They fight amongst themselves because they are SO manly and full of testosterone. One feels they should call it a robbery. Another feels that term is too extreme for what they are doing. They don’t notice hot Amber Lin in the corner. She stands, whipping off her glasses. “Hey, fellas, how about you just call it a situation?” They all can’t believe how hot and smart and good with words you are, Amber Lin! The cops are coming. They take you hostage…pulling you roughly along with their manly hands…oh, you wouldn’t have it any other way. You become a notorious gang, hitting coffee shops across the country. They choose the most decadent names: Pan, Dionysus, Bacchus, and you, Amber Lin, shall be Athena!

Amber: Mr. Real is the story of a spy character who comes to life and sexes up the woman like whoa. I made up that last part because I haven’t read it yet but I’m super hopeful that’s how it goes. I believe it is your wonkiest work to date? Please explain. Lists are acceptable; no, preferred.

Carolyn: You must be a psychic, because that is exactly how it goes! A woman brings a spy character to life. Except then the fighter from L.A. who plays the spy character on TV (and hates the character) comes along and is none too happy about him being magically brought to life for sex by some woman.

OMG, that totally sounds like I’m joking, doesn’t it? lol. Hey, thank you SO much for having me! You seriously ask the best questions. And I think you are fabulous and an awesome writer. Have fun with the roguish coffee shop guys!!

Amber: You see the way she flatters? I like it. Thank you again to Carolyn for joining us and for you fine readers who are following along at home. And now, the blurb and buy links for Mr. Real, which will warm your wonky hearts: 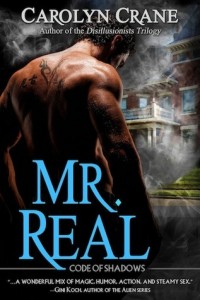 He finds the girl of his dreams…with the secret agent of his nightmares.

Fighter Paul Reinhardt has good reason to hate Sir Kendall, the character he brought to life to land a part in a TV ad; he’d do anything to forget him. A cross country road trip seems just the thing . . . until Paul finds himself inexplicably drawn to Minnesota and is shocked to discover Sir Kendall – in the flesh – with the girl he’d once loved from afar. He barges into Alix and Sir Kendall’s love nest, determined to stop the madness – somehow.

But is superspy Sir Kendall transforming into something more dangerous anyone can imagine? And what will Sir Kendall do when Paul and Alix finally give into their mad lust for each other?

Amber Lin writes sexy romance about messed up people, because everyone deserves a happy ending. Find her books or sign up for the newsletter at her website authoramberlin.com.
View all posts by Amber Lin →
This entry was posted in Interviews. Bookmark the permalink.