The Secret Sermon In Every Romance Novel 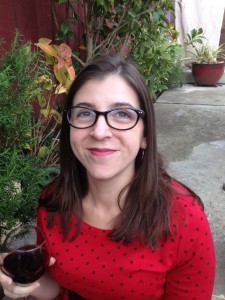 Welcome once again to the fabulous Amber Belldene, Episcopal priest and author of the Blood Vine Series of paranormal romances …

Thanks so much for inviting me back to guest post on Wonkomance!

This essay is really just one extended metaphor, but maybe you will find it useful. It all started with an interesting post/conversation on the romance blog Dear Author about the desire to see characters motivated by religious and philosophical values in mainstream (as opposed to Inspirational) romance. I’ve advocated for the same thing, so I appreciated the thoughtful piece and equally thoughtful commenters, including a person late to the conversation who strongly stated a preference religion be kept out of books.

I’m sympathetic to this opinion. Religion can be very divisive. I’m a priest in the Episcopal Church, and people assume things about my beliefs, values, and behaviors all the time. I’m often grateful for the polite reluctance to discuss religion. Members of my large extended Southern family privately scratch their heads over me being both a priest and a romance writer. But when I visit, we simply drink wine and play viciously competitive cards, which is really altogether more fun than debating theology.

The Dear Author commenter, who signed her comment Pet, also expresses this concern:

I am afraid that some authors will lose their common sense and try to give in to preaching. It is a huge turn off.

I think what she means by preaching is proselytizing—that authors might try to convert readers to their own religious perspective, which would turn me off too. (That’s why I don’t read Inspies!)

But on another level, we’re all preaching. Not the Christian gospel, or the Buddha’s four noble truths, but Romance with a capital R.

Last week, the New York Times Magazine published a lovely interview with the novelist Marilynne Robinson, who writes brilliantly about faith. There were a million quotable gems in the piece, but this one especially struck me:

A lot of people who actually believe in the sacredness of life, they write things that are horrible, desolating things. Because…[of] the fear of making self-revelation of the seriousness of ‘I sense a sacredness in things.’

Her observation made me so proud to write romance, and to be an enthusiastic reader and evangelist for the genre.

Literary culture disdains earnestness, especially about the most sacred things–love, sex and religion, probably because all three are so hard to write that, as Robinson says, the fear of getting it wrong prevails. But romance does not skirt the sacredness of each person, nor of the bonds that form between us. We are not afraid of a little sincerity! (Though, admittedly, a lot of sincerity makes me queasy.)

I know authors pen romance for many reasons—love of the genre, compulsion to write, unexpected detours from Literativille or Ivory Towers to Romancelandia. But it’s also because we share some core beliefs:

We could debate these semantics, and there are probably more core values, but the list of universal doctrine is ultimately pretty short.

Less foundational, but still important to the tradition, we have the tropes that scaffold our stories and sometimes make us the butt of jokes (like, say, The Italian Billionaire’s Secretary Mistress. I actually sort of love how the Harlequin Presents line doesn’t even bother with a titles, as if someone once unabashedly said, “Why not just call it 3 Tropes and a Setting?”). Underlying each trope is another bit of slightly less universal romance doctrine. For example:

I’m coming to think of each romance novel as a sort of sermon, shining new light onto a familiar truth, deepening our appreciation of it and our ability to live it out in our own lives. Those faithful readers of the trope-heavy category romances remind me of devoted church goers, longing for the comforting ritual of being told again in fresh words their most dear truth–that love heals, or that mistakes can be redeemed, that an ugly duckling is secretly a lovable swan, just as a seasoned preacher will tell you everyone needs to hear God loves them every Sunday.

Each writer has her or his own take on the romance doctrine, a distinctive world view which colors and flavors the way we tell these familiar stories.

Last year, Mary Ann and Ruthie wrote fabulous Wonkomance posts (which I refer back to every time I get bogged down in revisions) about how a romance novel is an argument in the sense of classical rhetoric. The argument is made up of logos, pathos and ethos. Their posts are well worth the read. I especially like how Ruthie offers the schema as a tool for analyzing our own work and why we may or may not like a particular book:

What’s so interesting to me, here, is two things: first, the idea that I might love an author’s work, love her characters, but hate her argument so much that I can’t even read her book…And second, the idea that I might dislike an author’s writing and her characters, her plot, and her style, and yet find her argument so fascinating, so convincing, that I can’t put her book down.

Later, Ruthie astutely points out that those masters of trope–category writers–are the experts at this kind of argument, and I would go even further to say if you don’t like a particular trope, you may be skeptical of its underlying dogma. (Ex. Maybe Boss/Secretary is never okay because you see the abuse of power as irredeemable, or both the billionaires you slept with were lousy in bed, as the incomparable Remittance Girl reports here, so you prefer to read about less wealthy guys).

A romance novel’s argument reflects the writer’s beliefs about romantic love and why it matters. If you write like me, you may not know what that belief is when you start a story, or that you even believed it until you finished your first draft.

Once I grasp hold of it though, I am most certainly writing to persuade you of it, to show you with all the logic, appeals to sympathy, and authorial credibility I can employ.

I’m trying to convert you to my vision of love, trying to stretch your already spacious heart a little wider, to embrace to the kinds of conflict and affection that move me and turn me on because I believe it’s good for you and for the world to love this way (and by the way, I’m entirely open to being converted to your way, too!).

Maybe I think about writing this way because I cut my teeth penning sermons instead of fiction, but I’m convinced we’re all doing it. I can certainly understand readers preferring not to read books with religion in them. But to me, the romance writer undertakes that courageous task Marilynne Robinson describes, we admit we “sense sacredness in things” and we want others to sense it too. A romance novel is our attempt to persuade. The story of a conflicted romantic couple is an ideal, page-turning, heart-tugging, arousing medium to argue for our take on this sublime truth.

Darling Serena Bell suggested I end this post by asking, “Can I get an amen?” But it feels more right instead to tell you that when I finish one of your books or any truly well argued and sublime romance novel, my whole body hums with that ancient word:

Amen. So be it. The affirmation of, the assent to, the beliefs that unite a community.

Love is good. It matters. Now go back to your life and make it real.

Amber Belldene grew up on the Florida panhandle, swimming with alligators, climbing oak trees and diving for scallops…when she could pull herself away from a book.  As a child, she hid her Nancy Drew novels inside the church bulletin and read mysteries during sermons–an irony that is not lost on her when she preaches these days.

Amber is an Episcopal Priest and student of religion.  She believes stories are the best way to explore human truths.  Some people think it is strange for a minister to write vampire romance, but it is perfectly natural to her, because the human desire for love is at the heart of every romance novel and God made people with that desire. She lives with her husband and two children in San Francisco.

Amber writes scorching and smart paranormal romance and quirky-hot contemporary romance–all of which draw on her interests in spirituality and sexuality.

11 Responses to The Secret Sermon In Every Romance Novel