Whenever I hear a book is a slow burn, I run in the opposite direction. While I certainly have loved some of them (LaVyrle Spencer comes to mind) most of the time I end up bored. When reviews say how the author captured the setting and the beauty of it, snooze. When there’s death in a book, I’m out.

But when it comes to these sorts of “I never read this”, there’s nothing more satisfying to me than being wrong wrong wrong.

I picked up Scrap Metal by Harper Fox because it was free. I saw that it had great ratings and I’d seen the author’s name before, so it wasn’t a totally random one-click drive-by. However, the free part was the driving force.

And I know this doesn’t really make sense in any sort of economic structure, but wouldn’t it be awesome if books could be afforded their cost based on how much enjoyment they give or emotions they evoke or how many times they’ll be re-read? Right now I’ll buy some book at $9.99 and DNF it halfway through and the money is gone, but this book, even though I loved it, is still free. I could agree to spend, say $100 a month, on books and at the end of said month, the Book-Love-o-Meter would spit out a percentage and Scrap Metal would have a lot of percentage points, that’s all I’m saying.

Right from the beginning, I knew I was going to like it, because I connected to the voice. I liked it, I respected it, I was ready to trust where it was going to lead me. Tell me about the Irish countryside, I thought. You won’t bore me. You can’t, because I love the language you’re using and the way that you’re using it. But I don’t feel we just stopped and talked about the weather or the countryside, not really. Every word moved the story forward, the setting was the action, and that right there, if we could do that every time, I would love beautiful settings.

I would love slow burns, though I’m not sure how slow this one can be called if I fell in love at the 4% mark on my Kindle.

Before the 4% mark, we meet Nichol who is cold and wet and uncomfortable as he rescues a lamb from a cliff. Then he trudges home to the house on the family farm that’s about to go bankrupt. He can’t go back to Edinburgh where he’d rather be finishing his graduate degree but he can’t save the farm, either, so he’s stuck in this rural purgatory, trying to save these lambs who keep dying anyway. And his mother recently died and his brother recently died. His grandfather, though, he’s still alive, even though he totally disapproves of Nichol. And so Nichol falls into bed at night, too exhausted to even be unhappy. 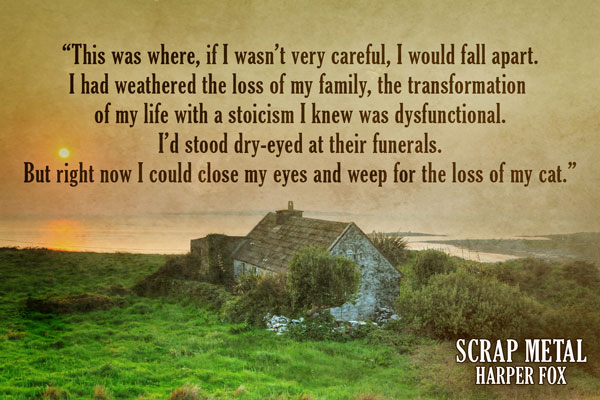 And then, as things generally do in a good book, things get worse. He wakes up in the middle of the night and it’s storming, of course, but above that he hears the sound of someone breaking the windows of the barn, breaking inside. And you know, just fuck it. He has no emotional bandwidth to deal with this be he has to deal with it, so he grabs the gun that belonged to his dead brother, the gun he barely knows how to use, and runs over the wet grass, just ready to do something crazy.

Inside the barn is Cam, who is on the run from the Glasgow mafia. He’s scrambled inside this barn for shelter and is hiding behind some haybales and the little lamb nudges him there. And Nichol is holding his gun, ready to be an angry Irish landowner, well he is an angry landowner for all intents and purposes, he just doesn’t usually self identify that way, and he says, in this totally conversational way, “I see my attack sheep have cornered.”

And both of these men are cold and tired and grieving in their own ways, but I just fell in love with how awesomely casual they are in their desperation. When Cam responds from behind the hay bale, this is their conversation:

“Christ, why the hell is it trying to…eat me?”

“It’s not trying to eat you. It’s hungry. It’s trying to suckle. Stand up.”

It’s like they’ve known each other a hundred years, in this dialogue, and yet they’re strangers; these are their first words to each other. Here, both of them remind me of little boys talking, and yet they’re not, and the problems they deal with are not. It’s life or death for both of them, more death recently than life, and yet their first concern is the little lamb with a penchant for climbing cliffs and nibbling on strangers and generally making trouble. They can’t hurt her, they won’t. 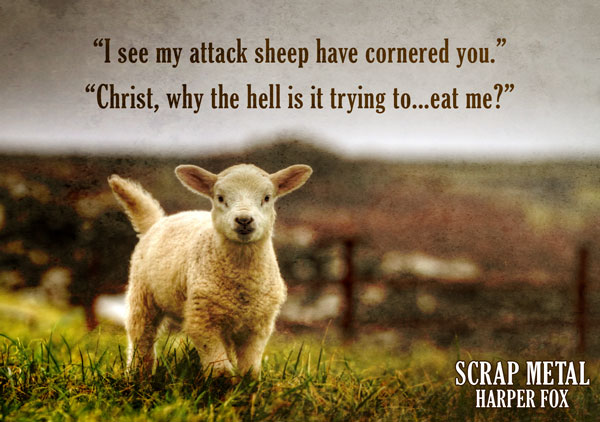 So they continue on, with Nichol holding a nervous Cam at gunpoint. Nichol is pissed, really, at life and at death. They fix up the windows so the animals won’t die of the cold, because the animals come first on a farm. And they go inside, and Nichol finally gives it up. He sets down the gun, because he was never going to use it, really. He’s angry at how much death there has been, the very last thing he would do was cause more of it, even to a trespasser. And he’s just drained. And feeling awful. He puts his head in his hands. He hears some sounds and a familiar scent but can barely lift his head.

Cameron was standing in front of me, at cautious distance, holding out a steaming mug. “Nichol. Here.”

My burglar had made me a cup of tea.

I think this is beautiful and so defines them too. How Nichol will work himself until he’s ready to fall over because it’s the only way he knows to honor the memory of his brother and his mother, and the only way he knows to show love for his grandfather. How observant and caring Cameron is, even when he should probably be running for his life. How easily they fall into a domestic rapport.

And I haven’t even gotten to tell you how Nichol studies languages or how Cameron builds art out of scrap metal or how Nichol and Cam and all of them *are* scrap metal, the ones left behind. But I did want to share one more piece that I loved. 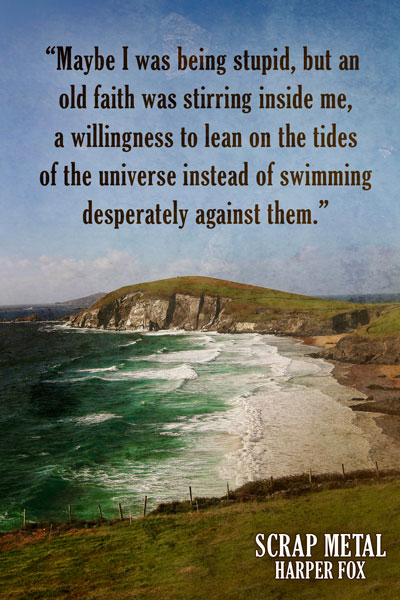 One of my favorite things is a story within a story. I think this can happen on a micro-level, when even a quiet metaphor can shine new meaning on an ordinary exchange. But they can also be larger, stories told through a character or a book. One of those stories in this book are mermaids. They aren’t real, of course, in this contemporary book, but there are their myths.

In one of them, a mermaid marries a man, and the man is so jealous and possessive. He locks her inside a room, but the mermaid escapes through a pipe and is gone from him. Nichol worries about this and Cam, because he wants Cam to stay but he doesn’t want to lock him in a room to make him leave. Cam will leave, he knows that, just like his mother and brother and father and everyone leaves. There’s just him and his grandfather trapped in his dwindling farm, and eventually his grandfather will leave him too.

Nichol thinks about the mermaid who got away, and how his mother told him the story, and asks himself “Had she been trying all my life to prepare me to face loss?”

Except I don’t think she was preparing him for that. I think she was talking about herself and him, how she was of this farm and land but how Nichol always dreamed of going to the city and being free. She was telling him that she wouldn’t lock him in, even if she kind of wanted to. She was saying that the only way he would stay on the land was if he wanted to, and that’s the journey of this book. It’s about loss, definitely, and it’s about finding where you really belong.

Amber Lin writes sexy romance about messed up people, because everyone deserves a happy ending. Find her books or sign up for the newsletter at her website authoramberlin.com.
View all posts by Amber Lin →
This entry was posted in Certified Wonktastical. Bookmark the permalink.