A Wonkomance Interview with Bonnie Dee

Hi there, I’m Amber Skye, writer of erotica. This is my first post here at Wonkomance, and I thought a lot about how to set the tone for my appearances here. Should I talk about my projects? Should I write up a short wonka-erotic story for your voyeuristic pleasure? Well, maybe later. But I’m a reader, first, foremost and for always. I decided that if I really wanted to celebrate Wonkomance with you, I should start with what I love to read.

So I thought of Bonnie Dee. To me, she is the quintessential Wonkaromance author, if there is such a thing in a sub-sub-sub-genre devoted to the strange. Her characters and plots are all kinds of daring and off-kilter, as well as deliciously sexy and heartwrenchingly sweet. And she graciously agreed to do an interview with me, so without further ado…

The first book of yours I read was Finding Home, the story of a 17-year-old male prostitute living on the streets. He may take the cake for most original romance hero I’ve ever read, but he’s completely hero-worthy – sweet, strong and even sexy. Were you worried about reader reception to an underage (among other unconventional things) hero? What has reader reaction been like for him and this story? 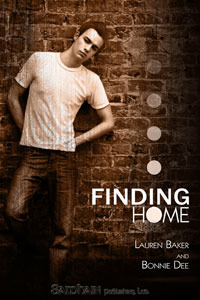 Yes, my writing partner and I were worried about the age difference and made it closer than we’d originally intended (the heroine is 23). The only way we felt we could make it less objectionable was to show how unformed Megan is and how mature a young man who’s had to take care of himself for most of his life could be. Lauren Baker and I were friends in a fanfic writing community and Finding Home was our joint effort to try to create something with an eye toward publication. We didn’t know at the time what was expected by the romance community. We just wrote what we thought was interesting and sexy. (Bear in mind, we’d been writing fanfic for The OC and definitely had the character of Ryan Atwood entrenched in our minds.)

Completely in love with our unconventional story, we attempted to land an agent or publisher and were rejected time and again. Then we learned about e-publishing. This was 2005, long before Oprah’s endorsement of the Kindle made “e-book” a common term. Imagine coming in on the leading edge of something that would turn out to be so huge. It’s been an exciting time for writers.

I wouldn’t say Finding Home set the romance reading community ablaze with excitement, but most who’ve read it have been moved by it. What more could one ask for from a debut writing effort?

In Butterfly Unpinned, our heroine is the 24/7 BDSM slave. Her owner, who happens to own a few other slaves, hires a Navajo woodworker, our hero, to build him custom bookshelves. What I love about Butterfly Unpinned is the juxtaposition of a somewhat stereotypical alpha/gamma character as the antagonist to the gentle, sensitive guy as the hero. The contrast is probably strongest in their finances, where the antagonist is incredibly wealthy, we see this in his lavish mansion, his parties, his slaves, whereas the hero is poor as dirt. Can you talk a little bit about how you came up with these two characters and what, if anything, you were trying to say with them?

Let me put my brain in the Wayback Machine and see if I can remember. I recall reading a forum about BDSM and knowing very little about it at the time. The germ of an idea was born of a misused slave being rescued by a hero who restores her sense of self. Knowing little about BDSM, I found a co-writer, Laura Bacchi, who was much more familiar with the scene to supply what I lacked. As for whether we were trying to “say” anything with the financial disparity between hero and villain…well, basically I love Cinderfellas. I was never attracted to romances with wealthy heroes such as Greek tycoons or billionaire financiers. I’ve always preferred regular guys or poor guys, sweaty, hardworking guys, guys with blue collar backgrounds. Don’t know why that is exactly. They’re just way sexier to me. Because one of Butterfly’s many issues is agoraphobia, I thought her perfect match would be someone who was raised in wide open spaces and could introduce her to them, teach her to find pleasure there—thus Native American Bryan. And as far as the “villain” Gary goes, he was just there to serve a purpose, someone for Butterfly to escape from.

I hear a lot of romance readers and reviewers clamoring for different settings in historicals, more varied races and more appearance of disabilities. We want variety. I know you’ve got A Hearing Heart, which features a deaf hero in 1902 Nebraska, a Chinese heroine in 1870 San Francisco, Bone Deep with a tattooed hero from a carnival freak show in 1946 Connecticut, all in your backlist. It’s like you’re the perfect answer to all those requests. Are you trying to diversify the historical offerings, or do the ideas just come to that way? How has reception been to this diversity? 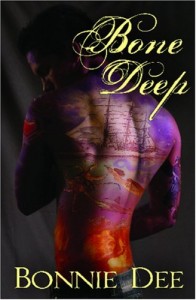 Not trying to diversify, I just wrote what interested me—and that’s poor guys struggling to survive against great odds and falling in love with women social light years above them (except for Captive Bride in which those roles are reversed). Bone Deep is another early work of mine. I was watching Red Dragon (Hannibal Lecter movie) and found Ralph Fiennes full body tattoo and heart-wrenching loneliness extremely sexy. Fantasizing about a tattooed man, I thought the story needed to be set at a time when there would still traveling carnivals and a lonely war widow would be a good counterpart to the hero so that helped determine the time period—though I suppose I could’ve gone post WWI rather than II.

I returned to my favorite theme of the outsider with the character of Jim [from A Hearing Heart], a deaf man in a time when many might assume deaf meant stupid. Guess I kind of duplicated the war widow idea when I had the new schoolteacher in town arriving with her own baggage of a fiancé who died before they could be married. It was a great challenge to write their exchanges when only one character can speak and the other must speak volumes with his eyes alone.

Man, I’m just a sucker for super lonely people finding each other, because I went for the same thing again in Captive Bride. Storekeeper Alan is a Civil War vet and Huiann is a Chinese woman who thinks she’s coming to America as a bride but is really to be sold into prostitution. This time there are cultural differences and language barriers to overcome as well. One of my favorite scenes is when the couple tells their deepest fears and secrets to each other because they can unburden without fear of being understood. And despite the fact that neither knows what the other is saying, their pain is completely shared at that moment.

Looking at your backlist, I’m struck by how prolific you are, as well as how versatile. You have over 40 books across contemporary, historical, paranormal, M/M. And even within those genres, the settings and characters vary greatly. How does your breadth of subject matter factor into your branding?

Branding, hah! That’s an issue all right. I know I’d be farther along than I am if I’d chosen one genre and stuck with it. People like to know what to expect from an author but I get quickly bored and want to shift to something new and shiny. This eclectic style of writing is what I do and so I came up with a tagline that hopefully explains what ties all these varied works together: Passionate, intimate relationships.

Through all this diversity, you’re a romance writer. Give us one piece of advice about love.

In real life I think it’s mostly about perseverance and entering a relationship with reasonable expectations. Life ain’t no romance novel. That’s why we read them. In real life, you’ll have an imperfect partner. You’ll get bored with him, angry with him, infuriated by him, but you don’t give up. I’ve been married twenty-seven years and it was worth working through any annoying times to have a partner who I can comfortably grow old with, someone with whom I have shared jokes and memories, someone who knows my quirks, habits and weirdnesses and doesn’t mind. 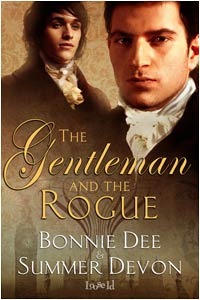 Honestly, all of the ones you’ve mentioned are among my favorite of my books. I’d add one more to the list. The Gentleman and the Rogue is one of my historical collaborations with Summer Devon. I absolutely adore Jem, the clever, smart-mouthed street boy (think Artful Dodger) who seduces a depressed lord from the edge of suicide and rekindles his joy in life.

I enjoyed Butterfly Tattoo by Deirdre Knight. Rather than try to encapsulate the story, here’s the blurb from Amazon: Michael Warner has been drifting in a numb haze since the death of his lover, who was killed by a drunk driver. As the anniversary of the wreck approaches, Michael’s grief grows more suffocating. Yet he must find a way through the maze of pain and secrets to live for their troubled young daughter. Out of the darkness comes a voice, a lifeline he never expected to find—Rebecca O’Neill, a development executive in the studio where he works as an electrician. Rebecca, a former celebrity left scarred from a crazed fan’s attack, has retreated from the limelight, certain no man can ever get past her disfigurement. The instant sparks between her and Michael come as a complete surprise—and so does her almost mystical bond with his daughter. For the first time, all three feel compelled to examine their scars in the light of love. But trust is hard to come by, especially when you’re not sure what to believe when you look in the mirror. The scars? Or the truth? 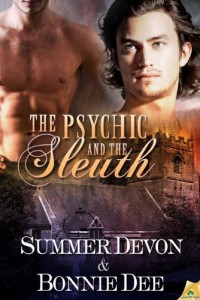 Releasing at Samhain in January 2012 is another Dee/Devon m/m historical, The Psychic and the Sleuth. Both Summer and I were intrigued by the spiritualism movement and the fascination for psychic phenomenon in the late Victorian time period. One hero is a con man with a psychic bent, the other is a police inspector intent on exposing him. Together they solve a murder case and, naturally, have a passionate affair.

In April we have a contemporary coming out at Carina, Serious Play. The hero is an ex-con struggling to get by. He’s hired by a woman who owns a bar. The couple fights their inappropriate simmering attraction until it boils over. Our editor says the story makes her cry in certain spots, so that must be good, right?

For more about my backlist, go to http://bonniedee.com. Readers can join my yahoo group to be notified of new releases. Find me on FB and Twitter. I’ll friend you, but I swear I never use either of those accounts. I’m a very bad social networker. Thanks for having me at Wonkomance. I appreciate your exploration of the quirkier side of the romance and will definitely keep the site bookmarked for reading recommendations. I’m always looking for something different from the standard fare.

Thank you, Bonnie, for that amazing interview. I love every little bit of it, especially your love advice, but in all honesty, my favorite quote is, “Branding, hah!” But, more importantly, thank you for the wonktastical backlist from which we may all glom for our wonkomance pleasure!

Amber Lin writes sexy romance about messed up people, because everyone deserves a happy ending. Find her books or sign up for the newsletter at her website authoramberlin.com.
View all posts by Amber Lin →
This entry was posted in Interviews and tagged author, Bonnie Dee, contemporary, erotica, historical, interviews, M/M, paranormal. Bookmark the permalink.

18 Responses to A Wonkomance Interview with Bonnie Dee