A couple weeks back, everyone at Wonkomance got happily tangled up in an email thread about the 1979 V.C. Andrews book, Flowers in the Attic, in the run up to its reincarnation as a Lifetime movie. It seemed like everyone had read it way back when they were tweens, except for me! I started it that very afternoon.

This isn’t a book report post, so I won’t synopsize aside from saying the book’s pretty fucked up, for what it is, and I enjoyed it quite a bit. If you want a more in-depth analysis, I think Shari may be planning one. Stay tuned.

It was kind of cool, reading this story for the first time at thirty-four. I could imagine reading it at twelve and being SCANDALIZED. And also FASCINATED. (I mean, Forever is totally vanilla in comparison, and that had been my naughtiest read at the time, rendering the Babysitters’ Club unpalatably tame forever after.) But reading FitA as an adult, and as an avid consumer and producer of smut, I could spot all the shocking reveals coming miles off. Plus, once you’ve read George R. R. Martin, no brother-sister coupling is ever going to supplant the Lannisters.

Truly, the thing I found most disturbing in the entire book is the scene where the older brother has the younger children drink his blood, to build their strength in preparation to escape the attic. (More on softcore cannibalism shortly.)

What reading FitA really did do for me, however, was remind me precisely what a perverted time of life childhood is.*

Nobody talks about children as sexual beings in our culture, because that in itself is somehow a sign of perversion. But we totally are sexual, and long before the point at which we know what sex is. Long before we have any interest in nudity or intercourse, years before we even hit puberty. I’m not talking about anything to do with others’ genitals or reproduction or romance. I’m talking merely about that visceral magnetism, divorced from what adults identify as sexual content or circumstances. I think we all possessed that, in childhood. I know I did. And since it arrives so much earlier than our attraction to potential sex partners—spurred instead by any number of strange stimuli—that formative magnetism just winds up seeming sort of…kinky.

As a kid, I was always drawn to the really dark, twisted scenes in movies. The revulsion response must share a lot of capillaries with arousal—some medical professional back me up on that. Like, while the Wheelers were the part of Return to Oz I dreaded the most, they were also the part I secretly anticipated with the most fervor. I loved creepy shit like that, even as it made my skin crawl. The closer something tread to that slippery line separating disgust and fascination, the more enraptured I became.

There are two cartoons I remember consuming me, circa kindergarten. Both featured pigs, and both were sort of off-market, if I recall correctly**, not starring name-brand characters. They were rare, shown way less frequently than the usual Roadrunner or Tom and Jerry installments. But they positively burned themselves onto my pre-sexual psyche.

The first one was about this pig who’s fishing at a lake, and falls asleep. He has a vivid nightmare in which a fish yanks him into the lake by the line, and proceeds to prepare the poor pig-fisherman for roasting and eating, including removing his clothes with a knife in a way that mimicked skinning, placing him in a baking dish, surrounding him with sliced vegetables, and putting him in an oven. The pig is—understandably—terrified. I, at perhaps four or five years old, was less understandably MESMERIZED. My little brain was like, “Dude, this is SICK. And it’s making me feel kinda funny. I really hope they show it again.”

The other mesmerizing cartoon featured a different pig, and I’m less clear on the details. (I know it was real though, as The Simpsons once referenced it.) He was a greedy pig, if I recall correctly, and this story was a sort of morality tale. The gluttonous pig is tricked and captured and subjected to what I can only describe as a force-feeding torture factory. The mad scientist villain straps the pig into this moving chair, including a metal band around his snout, and forces it to eat all manner of food, with the implicit purpose of fattening it up to be eaten (I think, or maybe my perverted young imagination layered that threat in.) Again—MESMERIZING. This cartoon was straight-up sadistic. Because, like the first cartoon, it featured a pig with human traits (clothes, speech) it had a distinctly cannibalistic taboo going on. And at an age when you’re still fairly sheltered from the horrors of humanity, cannibalism is about the grisliest thing you can conceive of. [Perhaps unsurprisingly, I was also fascinated by the story of Hansel and Gretel.]

Both of these cartoons were immensely cruel as well, showing the pigs suffering from sheer terror. I can only describe the horror-thrill of them as some early equivalent of what one might feel while reading or watching a fictional rape scene. Terrified. Nauseated. Disquietingly titillated.

Though I had no idea at the time, those two cartoons functioned as the first pr0nography I’d ever see. I wished so hard for them to be aired, it was akin to praying. I replayed and adapted them in my head, spurred by the resulting underpants feelings, but also sensing it was not polite, my infatuation with them. I sensed as well, there was something new and exceptional about the way those cartoons made me feel. And small wonder that they did—they were packed with the dynamics that characterize so much of the power-play kink adults engage in. One cruel actor, one helpless victim, restraint, degradation. 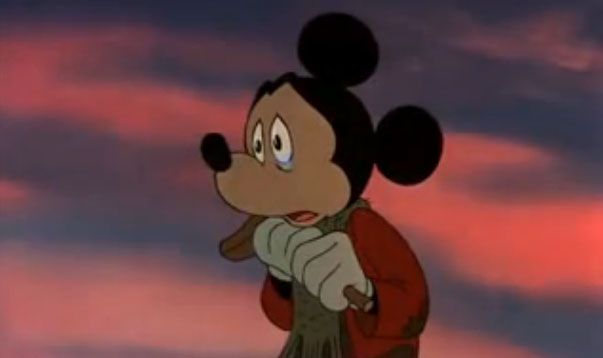 This reminds me of a story that my husband finds hilarious, about the first time I saw Mickey’s Christmas Carol. There’s an alternate reality scene in which Scrooge sees the mouse-Cratchits visiting Tiny Tim’s grave, and setting his crutch against the headstone. But my little-kid brain had forgotten about the crutch, and it jumped to the disturbing—but again, MESMERIZING—conclusion that the crutch was a bone of some sort, and that I was meant to infer that the Cratchits were so poor, they’d been forced to cook and eat their weakest child to keep from starving. Which is fucked up, and didn’t give me underpants feelings…but almost did. Maybe a little bit. I remember saying to my older brother, some days later, “Man, can you believe they put that in the movie? About the Cratchits having to eat their own kid?” And I’m sure his reply was a first-grader’s equivalent of, “The fuck you talkin’ ’bout, woman?” I only know for sure that I was disappointed to have the whole crutch thing explained to me. I’d grown quite enamored of my own sick interpretation.

Probably for the best, my fixation on those two sadistic pig cartoons (and on all things vaguely cannibalistic) burned away as I stumbled onward toward a more typical puberty. Case in point, I don’t get turned on while eating ham. Nope, those old fascinations were replaced by other gross-yet-intriguing things, such as imagining mouth-kissing Fred Savage, and wondering what was up with David Bowie’s tight gray pants in Labyrinth. By the time I saw The Little Mermaid, my downtown feelings were strictly Prince Eric’s to inspire. That terrifying scene where the chef is planning to stuff and cook Sebastian the crab was merely alarming, not arousing. My seedling of a cannibalism kink never put down roots.

There’s no predicting perviness. We’re all just naturally creepy. Go with it. Write about it, if you can get away with that kind of homely honesty.

If this post has any point—and it may not—it’s to say that sexuality is weird. And awkward and unpredictable, and can have little or nothing to do with actual sex. And it sprouts early, spurred by who-can-guess-what. I’d like to assume that all the people involved in producing those pig cartoons weren’t trying to make faux pr0n for budding sadists…

Actually, I’m not so sure about that one with the force-feeding torture. That shit was seriously kinky.

*Please refer to the story “Next of Kin” in your copy of David Sedaris’s Naked.

**Addendum: After drafting this post, I looked up the pig cartoons. I wasn’t able to find video of the fishing one—called Fish Tales, from 1936, boasting Porky Pig’s very first appearance—but I did find an incredibly thorough blog post which described it (mostly) as I’d remembered. I did find video of the force-feeding one, which was a Merrie Melodies from 1937 titled Pigs is Pigs. I won’t link to it, as none of the streams I found looked especially copyright compliant. Turns out, the pig in that one wasn’t as terrified as I’d remembered—he was actually kind of into it. Also turns out his tormentor wasn’t planning to eat him, but toward the end of the cartoon, the pig eats one more bite and explodes. Then he wakes up, as this story, too, was all-just-a-bad-dream. (It also has precisely zero moral, as evidenced by a confounding ending.) I’m not especially sad to report that the cartoon did not stand the test of time for me, as erotic fodder goes. Unlike David Bowie’s tight gray pants in Labyrinth.