Hi, my name’s Alexis Hall, and I’m a giant nerd. The truth is, I’ve been into video games since I was about eleven years old, and-in a way-he games I’ve played have had as much effect on me as the books I’ve read. And when I’m not writing, I still spend a lot of my free time pretending to be an electronic wizard. These days, though, I do it with my partner, so I’ve definitely grown as a person.

As well as big flashy games full of explosions and zombies, I’ve also always been interested in digital storytelling and interactive fiction. I’m not going to lie: the vast majority of games tend to be about burly dudes shooting other burly dudes, but with the rise of Indie publishing and increasingly accessible development tools, I’ve started to see games or game-like entities that draw-upon and feed-into most fictional genres. There’s Lovecraftian horror out of there, there’s classic mysteries, there’s physical comedy and, of course, there’s romance.

And, obviously, games are as different from books as books are from movies, but–like books and like movies–they have their own unique ways of presenting stories which do not replicate, and cannot be replicated in, other media. Interactivity creates a sense of personal, narrative engagement which is specific to digital media, and which shapes both the stories being told and our reactions to them.

So, I thought I’d put together a list of games or game-like entities that touch on romance or romantic motifs, and which might be interesting to the Wonko audience. I’ve tried for the most part to choose games that are free, and freely available, and relatively easy to get into, so – um, check ‘em out if you fancy it.

Oh, and not all of these games are SFW, but I’ve indicated that where relevant.

In no particular order:

The Kiss by Dan Weber (SFW)

If this is anything, it’s multi-linear poetry-a moment that unfurls endlessly into the past, the present and the future. It’s… beautiful. That is all.

Also, it looks like this, which is also beautiful.

Available: on-line here
Playtime: About 10 minutes, but could be longer

This isn’t romantic per se, but you can certainly read romance into it and out of it if you want. And also have an affaire. Ooh la la.

It’s set in an alt-history, pre-revolutionary France with magic. You “play” Juliette, who has been exiled from Paris by her husband, for reasons as yet unclear. She writes to him daily, planning the letters in advance and then inscribing them onto enchanted paper, which he then receives instantly in Paris.

The game mechanics are simple. You select what Juliette chooses to tell her husband about her sojourn in the country. The outcome doesn’t change-but you shape the context and, consequently, meaning as well. I think one of the many fascinating things about First Draft is that most games situate their interactivity in choice and outcome. Here, the interactivity is the act of creation itself. It’s an absolutely exquisite exploration of interpretative space – not only between perception, reality, and the written word, but between people.

Wonderfully written, delicately characterised, and endlessly intriguing, you’ll want to play this if you’re a sucker for epistolary novels, you enjoy Georgette Heyer and/or Dangerous Liaisons, and because it’s just gosh-darned brilliant. 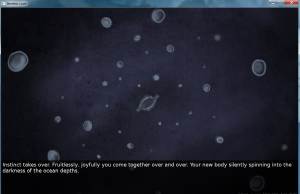 I genuinely adore this. The art, the music, and the words come together beautifully, and… I learned a lot of about anglerfish mating. But it has a strange and haunting resonance, despite – or perhaps because – of the mingling of the unfamiliar (anglerfish) and the familiar (love, fear, identity).

Available: on-line here.
(You can also download and install – it’s teeny tiny, so I’d recommend doing this for the most stable anglerfish love experience)
Playtime: About 5 minutes (supports multiple playthroughs)

This is a powerfully honest, beautifully written and deeply tender piece that describes itself as a “love note/sex edutainment piece” about muffing (includes images from, and links to, Mira Bellwether’s Fucking Trans Women #0.

So, since I understand dinoerotica is a thing now, I naturally thought of this charming love/friendship story about going to buy a ukulele with your dinosaur friend.

Available: on-line here:
(You can also download and install – it’s teeny tiny, so I’d recommend doing this for the most stable dinosaur love experience)
Playtime: About 10 minutes (though there are two endings, so you might want to replay) 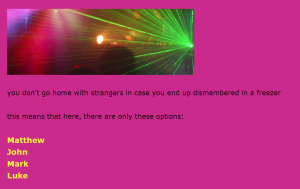 This isn’t remotely romantic – I’d go so far as to say anti-romantic– but it’s viscerally effective on the subject of desire – specifically female desire and its contexts and compromises. The author calls it a game about the “heart-stopping drudgery of being heterosexual in a world where heterosexuals are conditioned not to talk to each other, or listen to each other, or really have any idea what they are doing.” It’s cynical and heart-breaking at the same time, and depicts perfectly those splintering moments when you’re alone at a club and when all you’ve got is a fuckplan, endless, unarticulated longing, and no choices at all:

As a counterpoint to Sacrilege, Fuck That Guy is… well. Yes. It’s also set in a club, and it’s altogether more hopeful (for the most part) as you wander around trying to pull. Which you usually will, unless you actively say no, in various interesting ways – ending the game with the message: “Awesome! You got laid!” It’s very simple, unabashedly sex-focused, and cheerfully accepting of a wide variety of sexual choices, expressions and behaviours. It’s cleanly and effectively written, and manages to blend the generic (club setting, particular types of menz) with enough detail to make the encounters feel authentic and individual.

Choice Of games are sort of like those old Choose Your Own Adventure games I hope we all remember from our childhood, except better-written, thematically much cooler, and you don’t have to keep track of your own character stats or roll any dice. I’m kind of addicted to them, because ever since they began making games, they’ve been committed to writing stories that allow you complete control over your character’s gender, sexuality and sexual choices, as well… y’know… whether they like fighting or intriguing, or if they prefer to save puppies, or eat them with nice chianti. Choice Of games are essentially games built around the idea that a successful interactive narrative is a series of interesting choices. And when you find yourself gleefully playing a lesbian Ann Boleyn, I think it’s fair to say they’ve succeeded.

You can play most of their games for freez on line or download them to various Devices™ for a pittance.

My personal favourite is Affairs of the Court (which is actually a trilogy comprising Choice of Romance, Choice of Intrigues, and Til Death Do us Part), which is set in the court of Henry VIII – except with magic (which is the rather clever device it employs to side-step the issue of gender being kind of relevant to who marries whom when there’s succession involved). You can play the first part for free.

There’s also Choice of Broadsides, if you ever fancied being a gay and/or female Hornblower.

This is completely non-interactive.  It’s basically a short, visual novel about the sort of things that The Dream of the Fisherman’s Wife are about. But it’s actually weirdly adorable – joyous, even – and exists in subversive opposition to… uh… typical images of tentacle-themed erotica, which – not that I am an expert on the subject – tend to pretty violent. Whereas this is tender, consensual, and mutually enthusiastic.

Available: for download here.
Playtime: 20 minutes, depending on reading speed

In EoWC, you play the Duchesse of Elstwhere, who is shipped off to Wulfhammer Castle in order to marry the great warrior, Embric. Except he’s nowhere to be found. Instead, you pootle around, getting to know the denizens of the castle, collecting pretty dresses and occasionally losing them in a goofy kind of way. Oh, and being a lesbian.

It’s a very light-hearted and – honestly – raunchy little game and, even though there’s clearly a strong element of parody here, there’s also a surprising amount of depth behind it. There’s a kind of exuberance to the Duchesse herself, and lots of sexual silliness as she bounces into the bed of pretty much every principle (female) character. Nevertheless, I found myself oddly moved a lot of the time, and the various relationships (including, of all things, being playfully molested by a mermaid) genuinely romantic.

Also it might just be me but the Duchesse looks a bit like Delphine Dryden, you know, if she was an inch tall and made of pixels.

This isn’t actually available any more, as it was released by Infocom in the late 80s (buuuuut I think it’s “technically” abandonware, so if you were to Google it – not that I would advocate such a thing – you could probably acquire a copy), and was a genuine and good-faith attempt to create a piece of interactive fiction (of the old “go east/examine table/take lemon/curse the goddamned parser” style of text adventure) that felt like a romance novel. A romance novel of the 80s. So, should you play this, expect to suffer a “fate worse than death” a lot.

Though not at the hands of the hero, thankfully.

Allow me to share the blurb, which is, in itself, a piece of perfection:

In the 17th century, the seas are as wild as the untamed heart of a young woman. But when you set out on the schooner Lafond Deux, bound for the West Indies, your thoughts are only of your ailing father who awaits your care. Little do you know that your innocent journey will soon turn to dangerous adventure.

You barely survive an encounter with pirates, whose plans for you include a fate worse than death [emphasis mine]. The explosives, the rocky reefs, the vicious crocodile – all these are obstacles which you must overcome with cunning and agility. True, it’s not easy; but at least you can control your fate. What you cannot control is much more dangerous: your passion for Nicholas Jamison, the handsome pirate captain.

Tall and lean, with azure eyes that penetrate deep into your soul, he makes your blood quicken despite his unsavory past. When you’re in his arms, swirling around the dance floor or secluded in the flowered depths of the gazebo, you are apt to forget your mission.

But don’t dally too long with Nick. For your father is waiting, and on his rescue lies the fate of more than one man. Prepare for adventure on the high seas, lass. You’ll need every bit of pluck you can muster.

It’s… fun, honestly, although, like any old fashioned adventure game, fucking frustrating without a walkthrough. But the heroine is plucky and resourceful, and the hero is… tall, and doesn’t rape her. It’s not hugely interactive/responsive in terms of character and relationships (interactivity is all about world, exploration and puzzle-solving) – so you fall for Jamison and there’s nothing you can do about it. This often reads a little bit strangely, because it means the narrative  has to try and tempt you into feeling some degree of interest in the guy, without forcing it upon you, but all it really does is remind you that Romance Is Not Your Choice today.

Also, at one point the villain offered to run off with me and I was totally up for it because who wouldn’t be. But it wasn’t possible.

But regardless, Plundered Hearts is written with real vim, and while it doesn’t offer much romantic interactivity, it does feel a little bit like playing The Windflower which I, personally, call a win.

This entry was posted in Certified Wonktastical, Thinky. Bookmark the permalink.