A few days ago, Del Dryden and I had the following email exchange:

Me: And if you’re looking for another great one, try Jo Goodman’s Marry Me. Heroine has spent her life as a boy and is pregnant and gender-confused.

Del: Oh holy god sign me up for the gender-confused pregnant heroine. I’ll put it on the TBR. 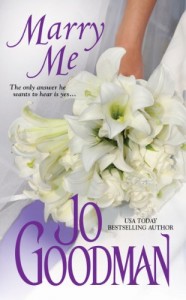 y that particular story resonated for her, she’d probably be able to explain it (and I’m guessing it’s not because she was a pregnant boy earlier in her life, although because I know her only online, I haven’t ruled that out). She might say gender confusion is interesting, or sexy, or that she just enjoys stories with pregnant heroines. Or she might just say that she loves “weird stuff like that.” And all those explanations would be totally true.

Beyond all that vague personal stuff, though, there’s a reason we Wonk-o-mantics are crazy about the wounded, the wacked, and the weird. And that reason lies at the heart of story theory. In other words, we don’t love wonk-o-mance because we’re perverse (though most of us would happily confess we are, and also perverted)—we love it because it’s actually the epitome of what romance can and should be. That doesn’t mean we want every romance to be wonky, but we believe you can learn a ton about writing a romance from reading (and writing) the wonky.

I’m grotesquely paraphrasing story theorists like Michael Hauge and John Truby here, but the most basic form of a love story is:

Two wounded people, who have donned masks to protect their true selves from being seen by the outside world, meet and discover that in each other’s presences they are able to unmask themselves and live as their true selves.

Now, of course, the genre has other constraints, and story theory makes other demands on the story. Romance requires a happily-ever-after ending, so the wound can’t be so deep or so weird that an HEA is impossible. And good story requires sympathetic characters—characters we can see ourselves in, characters who have never done something so totally unredeemable that we can’t possibly forgive and love them.

The very best heroes and heroines, then, are as deeply and as weirdly wounded as you can make them, without stepping outside the genre’s and the story’s other constraints. And when a writer walks that line—even if, or perhaps because, she steps over it—you get Wonk-o-mance. And, if you’re anything like me and Del and the rest of us, you, well, just love it.

Serena Bell writes stories about how sex messes with your head, why smart people do stupid things sometimes, and how love can make it all better. Read more >
View all posts by Serena Bell →
This entry was posted in Writing Wonkomance and tagged wonkomance theory. Bookmark the permalink.