The first part of this series about women and music is here, and started in 1990.

The summer of 1994, I went into a music store, a shop that sold instruments and made and repaired them, and tried to buy a pick-up for my cello.

I had a second-hand Fender 20 watt solid-state amp, and I wanted to mess around. I had played cello professionally at that point, but was interested in how I could make a cello work in contemporary ensembles. You know, a band. 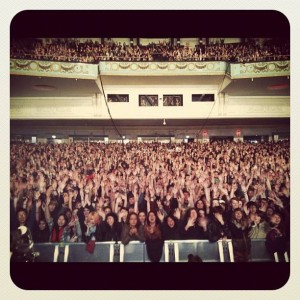 I don’t know I’ve ever had the kind of daydreams a lot of performers do – I’m not sure what the daydream of a musician is. But I had performed a lot by then, in venues for classical music. I had played with other musicians, and gotten hooked on that energy. I had been to countless concerts, glutting myself with noise because I didn’t have access the way I grew up.

It felt big. My new-to-me-amp felt heavy. I had discovered a knack for arranging the music I loved to include cello parts that I was interested to figure out how they would translate in a session.

Already, I had hung around, after local concerts, watching dudes sit in with local bands, watching local bands jam. And even though the time was over when I was walking past tables of boys in the high school cafeteria talk music, and wasn’t invited, I had this faith that if I just hung around long enough I could sit in. I often took my cello to these events, strapped to my back. I could talk music. It was 1994, music was happening, everywhere, in every garage and house share and dive venue.

I heard yeah, hold up, maybe the next jam so many times by young men in plaid flannel and dread nubs that I stopped bringing my instrument. Stopped hanging out. In Olympia, Washington, across the country from the backrooms of Lawrence, Kansas, where I was trying to make this happen, there were girls like Kathleen Hanna and Heidi Arbogast and Tammy Rae Carland who got fed up with dudes owning the shift in popular music and they organized. Formed collectives that splintered into labels and supported women musicians and tours. They were loud, their music was loud, and because I had also been subscribing to zines, making and writing my own, I heard their signal, all the way where I was, in the form of distorted tapes made at house parties and “reports” of happenings in photocopied zines.

I was working as a barista in Chicago that summer, saving money to go overseas. I splurged on my amp, wanted a pick-up, walked into a music store with my cello strapped to my back.

I didn’t walk out with a pick-up.

The television show Gilmore Girls had one of the first dramatizations of the coming of age of a female rocker I’ve ever seen, including the significant barriers. Lane Kim’s barriers were not mine, but they felt familiar in their overwhelming impossibility. Carole King played the owner of the music store in Lane Kim’s small town, and this recurring role introduced a history of the difficulty women have faced in in music. In one episode, for example, Lane discovers Sophie’s (Carole King) album of original songs, an album Lane remembers listening to in childhood, and wants Sophie to tell her everything about it. Everything about writing and performing and making it. Sophie takes the album from Lane’s hands and looks at it for two beats, looks at Lane, says oh, this. And inside of that utterance is a world that brought a woman who wrote and produced her own album to a small town running a music store. Lane is oblivious, of course, rapt in the light of her own trajectory towards a life she’s certain will bring her to an arena filled with fans. It was a scene, that when I saw it, ten years past when I first walked into that music store in Chicago, I wept.

Carole King, of course, made it. She’s Carole King. Her portrayal of Sophie, however, is weighted with her own awareness of an alternative history. What makes this storyline important, however, is that Sophie, while steeped in the gravitas of the consequences of sexism, never loses her passion for music, her passion for young women discovering it. In this scene I’m sharing, we get a sense of Lane’s yearning, her barriers, her drive and commitment. We also get a sense of Sophie’s recognition that maybe this time, one of us will make it.

Lane does get her band. Her tour. She gets right to the leading edge her dream. Then, she gets pregnant with her band mate, who she marries and loves. Her story, when the show ends, is still suffused with love, and it’s too early to know if she won’t make it to her arena, but it’s a story I feel with ten different parts of my heart.

The music store in Chicago looked a lot like the music store in that scene. Instruments of every kind on every wall and in every path. It was a warren of potential noise, and potential connection. I spent a long time just looking, and like the scene I shared, not touching. There wasn’t anything about it that wasn’t perfect.

Feeling like that, your own instrument warm against your back, the confidence and hope is intense. You love music beyond reason, and you have evidence others do, too. This is the headquarters of your tribe. This is where your dreams are understood.

You don’t have any doubt that the dude behind the counter, his left fingertips callused, will understand what you need. You are certain you’ve left the sessions behind, the ones where you wait and wait, your own fingers restless. You’re certain this the beginning. You’re certain you exactly where you are supposed to be.

This is part two of a short series I’m writing for Wonkomance on women and music, including women musicians