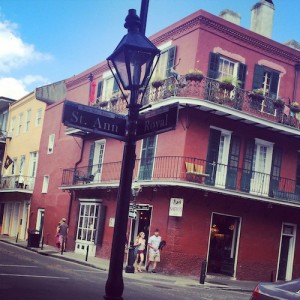 Photo by Kailynn Jones, who is a badass photographer.

Among the things I noticed about New Orleans: the smell has changed since Katrina (not necessarily for the better or worse, just…changed. I was warned about this by family who’d visited since the storm). Old cities in warm climates tend to develop these olfactory patinas, distinctive signature notes of their best and worst fragrances layered together over centuries. Before its nonconsensual power-washing, New Orleans’ scent was always aging magnolia petals and old crawfish boil, but…more. Those things together, forming a new/ancient fragrance, which was then steeped into brick and slate and paint and wood and yes, the smell included notes of piss and vomit, but also jasmine and fresh herbs growing in window boxes. The latter smells are all still present, and I assume that after enough years, the spicy-sharp smell of crushed magnolia blossoms will also re-assert itself. But I’m pretty sure the restaurants aren’t allowed to just chuck the old crawfish boil water into the alley when they close for the night any more, so it’s possible the classic NOLA smell will never return and I’m not sure how I feel about that. 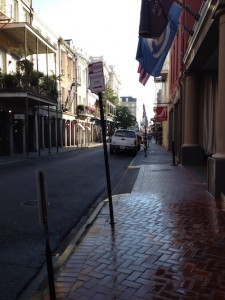 I probably should’ve mentioned that I love New Orleans and just about always have, ever since my first visit there at age five or six or so. Because of this, I have many strong opinions about it, one of which is that it should smell a certain way, and another of which is that the best time to experience the city is in the early morning. New Orleans at dawn is a drowsy, once-beautiful but still-charming lady of the evening, rolling over and blinking in exhausted appreciation at the sunrise that paints her with a damp, rosy glow and reminds her of her distant youth even as she’s still groaning from the previous night’s excesses. Somewhere in the French Quarter, a saxophone is already playing. That hasn’t changed. New Orleans will pull the covers back over her head and snatch a few more hours’ sleep before she rises to search out some chicory coffee and beignets. I’ve noticed quite a few conference attendees on Twitter expressing a wish to do the same since returning home.

Several Wonketeers attended RT this year. We were spread out a bit; some of us stayed at the main conference hotel, some were at another hotel, and several Friends of Wonk were located in an extremely cool townhouse in the French Quarter (I think it was Shelley who termed it ‘bordello chic,’ pointing out that it looked like Belle Watling’s crash pad. Hopefully Jeffe Kennedy or Megan Mulry or Ann Calhoun will post some pictures, hint hint).

But we kept meeting up, by chance and design, mostly in the conference hotel lobby (A MASSIVE WALL OF SOUND WITH INTERMITTENT DRINKS SERVICE) or at the Green Goddess (a sidewalk cafe on Exchange in the Quarter, where the food is all some crazy Babette’s Feast level of transcendent and you can just taste the love and reverence in every fucking bite…plus they also had a lot of vegetarian, vegan, and gluten-free options, and it probably would surprise nobody to learn that Wonkomance is heavily loaded with members who utilize some or all of those options).

This RT, food seemed even more than usually important, possibly because New Orleans, but also because there were eddies in the time-space continuum, so people kept planning for food then not getting to have food until they’d become hangry.

Sometimes people couldn’t even make it to the actual restaurants and had to simply resort to whatever they had in their rooms. I’m not going to say “Don’t trust Cara McKenna alone in a hotel room if Cheetos are at stake,” but…she did feel strongly enough about these Cheetos in her room to take and subsequently share a photo of them. Read into that what you will. Cara, Shari, Amber and Tamsen Parker also apparently laid waste to several orders of beignets, which is a thing one is required to do when in New Orleans.

There are other breakfast options in NOLA, though. For example, this “french toast” thing at Green Goddess, which involved some sort of apple substance and caramel and…all the gluten, and most of the dairy. I didn’t eat it, but it smelled amazing. Everything at that restaurant was amazing. We couldn’t have the Wonkomance dinner there because there wasn’t room, though, so for that event we went to Carmo, which was also superb. Dinner conversation included the set-up to such classic lines as, “Adorable Psycho is the name of my breakout album,” so you know that was a good time.

There was a plan to follow that dinner up with karaoke, and a few of us made it that far. Shelley sang Son of a Preacher Man and one of the bar employees fell in love with her I think. Then Kailynn Jones sang Hit Me With Your Best Shot, and I think the karaoke DJ fell in love with her a little bit. Mostly, though, the bar was dominated by a couple of large bachelorette parties, and there were several on-stage incidents featuring plastic penises (one of them about a yard long) and a lot of extremely unfortunate behavior. Blah blah, human pyramid with a drunk bride on top, yadda yadda yadda makeshift strap-on penis envy acting-out, blah blah some chick attempting to sing while riding a giant foam cock like an unfortunate pony. As my fabulous agent, Courtney Miller-Callihan, so aptly put it, “It’s Bourbon Street. It’s not a place for self-esteem.” 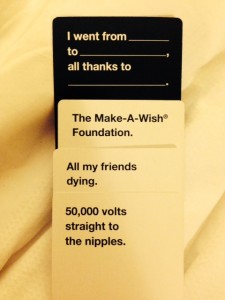 Also at the karaoke bar, Shari and I demonstrated to Amber how to do a Jell-O shot. Hint: it does not involve a spoon, Amber. No spoons. Just tongues and some well-timed squeezing. Anyway, after that it was clearly time for a semi-drunken midnight game of Cards Against Humanity (picture of one winning hand, courtesy of Cara). Life tip: never play CAH with Sarah Frantz unless you are prepared to lose, and lose big. That woman is frighteningly good at CAH, and somehow I don’t think it was just newbie luck.

RT is a professional convention, so of course we also all attended things, presented things, signed things. We all met people and fangirled people. Some of us also pitched and/or wrote things.  The usual. But it was all going on in New Orleans, which made it extra fun. New Orleans is one giant plot-bunny generator. I want to go back there and stay for about a month, people-watching and writing. Many of the apartment-for-rent signs conveniently specify whether the apartment is haunted or not, but I think I’d take my chances on this ambiguous place over an art gallery across the street from Pere Antoine. Ghost, schmost, it’s all location, location, location. Shelley, you comin’? 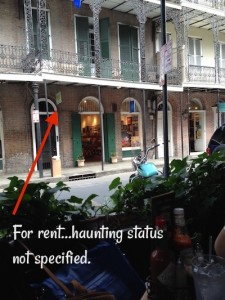