Running for My Life

It’s not as hard as you’d think to lose a part of yourself.

Usually, for me, it works the other way around. As I get older, I add more to myself. I become larger, in the Walt Whitman “Do I contradict myself? Very well then. I contradict myself. I am large. I contain multitudes.” kind of way. The older I get, the more risks I take, the more new skills I acquire, the larger my definition of myself.

But sometimes I lose something. Lose track of a part of my person that I had thought was mine for good.

I haven’t run at all, really, in 2014. If you’d asked me how I felt about not running five years ago, I would have told you that not running was my general state of being. I had never been athletic in my life. I tried. I wished I was. I flirted with various sports like rock climbing or sculling or…well, that’s pretty much it. I ran two sprint triathlons in my twenties, and the 5k runs at the end of them almost killed me, but I was beyond proud of myself for finish those races. The markered-on race numbers on my arms and legs? Friends and co-workers marveled at how long it took for those numbers to fade.

I confess that I might have touched them up just a little. A dab of the Sharpie here or there…

This is NOT me.

Letting go of that feeling of being a total badass for completing those triathlons was hard, but let it go I did. I was not athletic. I was also a smoker. (Although triathlons are BRILLIANT for people who want to quit smoking, let me tell you. You can bullshit your way through a bike ride or a run if you’ve been cheating and sucking down Camel Lights out back behind the bar, but you cannot cheat on a swim. If you only have a split second with your face out of the water to suck in oxygen, you learn rapidly that the diminished lung capacity of smoking and swimming simply do not mix.) Running the triathlons was an aberration. Not really me. So they faded away, along with my race numbers (eventually).

Then, five years ago, my sister ran a marathon. Much like me, my sister had never been particularly athletic, and I was blown away by her accomplishment. By her commitment, which was challenged when she was injured during her training and had to spend weeks running on the elliptical machine instead of the road. By her strength, which shone out of the photographs I saw of the far-away event, like she’d swallowed the sun.

I wanted that. Wanted it badly enough, for once, to get off my ass and make something happen.

When my sister moved back to Chicago the next year, I asked if she’d run the marathon with me. We’d joked about it before, but I was serious this time. I don’t think my sister had any burning desire to run another marathon, but she loves me, so she said yes.

We registered. We trained. Separately mostly, although we did the occasional long run together, but work schedules (and my need as a single mom to find a babysitter every time I ran…hello, treadmill at the gym!) got in the way most of the time. In eight months I went from barely being able to run around the block to finishing a 26.2 mile race. 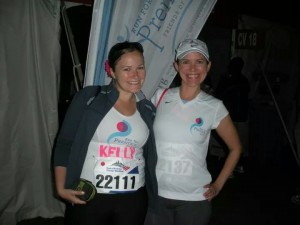 Not speedily, I should make clear.

There was a lot of walking on our dangerously hot race day, and that could realistically be called a life-saving decision. The wail of the ambulances taking overheated runners to the hospital was a constant background noise that day. I wanted to give up the entire time. At one point, I was running (barely faster than walking) next to a woman who burst into tears when she spotted a friend on the sidelines, sobbing, “I can’t do this anymore.” I wanted to slap her in the face. Couldn’t she see that I was barely hanging on to the will to keep going forward? Sobbing and carrying on about quitting was only making it worse. Sheesh!

I lack a little something in the compassion department around Mile Twenty, apparently.

One of the things you learn while training for a marathon, though, is that running a marathon is almost entirely mental. Putting in the miles is just putting in the miles. You do it and your body will get stronger, will gain endurance. It’s an equation: miles in training, miles out racing. But what makes or breaks you as a marathoner is your brain.

During those long runs every weekend, you have all the time in the world to build yourself up. To be your own cheerleader. To marvel at how you are running each week longer than you have ever run before in your life. To remind yourself that you can do it, even when it feels like you are maybe dying, like you can’t possibly go another two miles after having run fourteen.

That’s what you can do with all that free time.

That is not what I did. Not at first.

I spent the time on my long runs telling myself I was weak, I couldn’t possibly complete this enormous task, and I should probably give up. Getting to the point where I managed to shut off those voices and change how I thought about myself was a life-changing experience. Because you can do it and you are amazing and the magic thing about those messages from your body telling you that you simply must quit is that you don’t have to listen to them.

It’s a marvelous lesson to learn. And it directly impacted the rest of my life, jump-starting the writing which had been on the back burner since my son was born. Unfortunately, despite running three marathons and seven half marathons since that first long, hard race, it’s a lesson I’m having to learn all over again.

Earlier this year, I did something—something bad—to my back. For the first time in my life, I went to a chiropractor, which was only possible because my good friend Dr. Nancy is one, and she didn’t charge me for my visits. Healthcare, y’all. It’s a bitch. Thank goodness for friends with skills.

In any case, after sessions with the electro-stim machine, and heat therapy, and ice therapy, and adjustments, and stretching, stretching, and more stretching (god, I loathe stretching—give me a marathon any day), I finally got my back in order again. But for months I hadn’t run. Some weeks, I had barely moved. I spent sixteen hours a day at the computer much of the time and had taken to sneaking out on the back porch once or twice a week at midnight to smoke a cigarette, which really felt like giving up.

Somewhere in all that time, I lost the part of me that had come to think of myself as a runner. As an athlete. It had taken me years to redefine myself, but it only took months to lose the belief that running was an intrinsic part of my life. So, I’m back at the beginning again, trying to get ahold of that part of myself I’ve lost because I’m not willing to let it go. And it’s hard. It’s hard, but I want it. 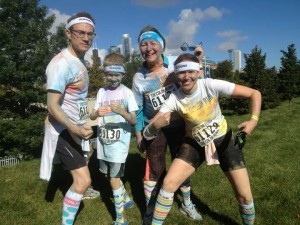 Is there any part of your younger self that you wish you could get back? Or have you experienced that expansion of possibilities that comes with more experience and wisdom as you get older? Am I the only one who needs ridiculous challenges like marathons to get motivated?

7 Responses to Running for My Life