“HIDE IT WHERE THE CHILDREN WON’T SEE IT!” —Cincinnati Enquirer 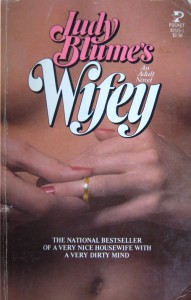 When I was cleaning under the bed the other day—for the first time in what unearthed issues of Harper’s suggested must be close to two years—I uncovered my yellowed copy of Judy Blume’s Wifey. My immediate reaction was, “Hot damn! I ought to do a book report on this for the Wonk-o-Mance blog!”

I should say up front, Wifey isn’t a romance, and hence can never be classified as a wonk-o-mance. But it’s in a bastard cousin of the genre and was required reading of a bygone era of bold ladies, and it’s thoroughly wonked, so I’m going to round it in.

My copy is a used one—I was two months old when the first paperback edition came out in 1979. My mom was thirty. Sandy, the book’s protagonist, has two young children, seven and ten, I believe, while at the time of publication my mom had a toddler and an infant. Like Sandy, I’m thirty-two, though I don’t have any kids yet. But it was interesting to read the book again for the first time in a few years, being the protagonist’s age and now married, and knowing my mother was a similar age when the book was making waves, a young, stay-at-home mom like Sandy. I’m a stay-at-home writer with a somewhat uncomfortable relationship with my housewifely duties [see: bed not cleaned under in two years]. In short, it all felt very relevant. The book makes me feel a strange, warped kinship with women of my mom’s generation. It’s like taking a field trip into alternate universe of young womanhood. This could have been me…

Wifey is of a genre I quite adore—smutty, rife with scandal and longing and lust and betrayal, with an ending that would make many a happily-ever-after-requiring reader burn the book upon finishing. The last lesson it seeks to impart is “love makes everything okay.”

It very much made me yearn to reread another book— Jacqueline Susann’s Valley of the Dolls (1966). But I already reread that last year, as I do most summers. Valley has got a pretty terrible reputation, but goddamn, I love that book. I don’t know how many times I’ve read it, but it’s in a very heated race with Island of the Blue Dolphins and A Prayer For Owen Meany for the book I’ve spent the most time in. Make of that what you will.

Wifey and Valley of the Dolls are both anti-romances…nearly. They’re jaded, sure, but both are packed with protagonists longing for love and romance. The characters want nothing more than an HEA, but the stories’ morals say, “Sorry Toots, you ain’t gettin’ it.”

Valley is far grittier, and grander in scale and plot, but the books’ endings, in respect to those scales, are strikingly similar in tone. Not suicide-pact tragic, but not cheerful. Endings that don’t satisfy one’s craving for romantic resolution or perpetuate the notion that true love will make everything okay. They’re downers, in a matter of speaking. But I love them so. The thing I, as a reader, relish even more than a happy, tidy ending, is envelope pushing, and Blume was pushing some pretty heavy envelopes when she wrote Wifey. Remember how in Forever… (1975; thanks to my awesome, sex-positive, pragmatist mom for giving it to me when I was about eleven) it was kind of shocking, when the heroine doesn’t stay with the boy she loses her virginity to? Shocking, but…realistic. I mean, how many of us have only slept with one person, the one we marry? Plenty of people, but not a majority, that’s for sure.

So Blume shocked people…by being realistic in a genre not always welcoming of a strict adherence realism. And she did so again in Wifey. Everything that happens in Wifey rings true. It’s more than a bit seedy, but I totally believe there were and are tens of thousands of Sandys out there. Perhaps fewer now that there are fewer full-time housewives, but still. I think what gives me a macabre sense of fascination about both Wifey and Valley of the Dolls is that they’re almost like romances that kept going, after the HEA…and revealed that the happily didn’t last for ever after. More like, Happily For a While, Until Everything Went to Shit, As it Sometimes Does, Kid, Sorry.

From the back cover copy:

Wifey is tired of chicken on Wednesdays and sex on Saturdays.

Sandy and Norman have been married for twelve years, and over time his dispassion and king-of-the-castle perfectionist expectations have taken their toll on her. We meet Sandy when she’s on the brink of a mental break. She’s tired and beat down, energy sucked out by a listless marriage and a string of psychosomatic illnesses.

Page 9
“Oh, San, for God’s sake.” He tried to put his arms around her but she brushed him away. “You’re so damn touchy these days,” he said. “I can’t even talk to you any more.”
Any more? Sandy thought. But she didn’t say it.
As soon as she heard the back door close she picked up a plate and flung it across the kitchen. It smashed into tiny pieces. She felt better.

Page 19
Sandy waited until the first commercial, then went back to the kitchen and marked Banushka’s chart. Banushka’s chart had been Norman’s idea. He’d recorded every pee and crap the dog had taken since they’d brought him home from the kennel, four years ago. When the children were born Norman had insisted that Sandy keep charts for them too. Careful records of their temperatures and bowel movements, with the appropriate descriptions, exactly as his mother, Enid, had kept for him when was a boy. […] He and Enid still discussed bowel movements and their bathroom cupboards were filled with disposable Fleet enema bottles, just in case.

Page 181
All her life she had let others decide what was going to happen to her. Maybe now it was time to please herself. Call her own shots. She laughed out loud, remembering the two times she had made her own decisions; to vote for Kennedy and to name her baby Jennifer. Two times in thirty-two years that her decision was not based on someone else’s feelings, someone else’s choice.

But maybe it’s only fair. Norman’s got secrets of his own.

Sandy doesn’t succeed in killing herself, though she does give it some thought, including thinking the bathroom was best, as the clean-up would be easiest for whomever found her, but then she worries she’d screw it up, wind up a vegetable and be a burden to everyone, and chickens out. But Sandy does eventually succeed in sleeping around behind her husband’s back, more than once, with varying results. She even plots to get a divorce and run away with one of the men, and the way the book and its heroine are written…you’re just about rooting for her to get away with it. Miserable creature she may be, but it’s hard not to like her, even as you ride along, watching her mess up her life.

Page 263
She waited until after dinner, until they were both seated in the den, Norman reading the paper, Sandy with her needlepoint spread out on her lap, the TV tuned in to some variety show, a summer replacement, before saying what she had to say. “Norman, I’d like to talk to you.”
“Go ahead.”
“Will you put down the paper, please, this is important…”
“I can read and listen at the same time.”
“Norman, I’ve got gonorrhea.”
“Uh huh…” He turned the page.
She raised her voice. “I said I’ve got gonorrhea!”

I’d love to hear other people’s memories of discovering Wifey, whether they did so when it came out, or a bit tardily, as I did. In this age when kinky erotica’s gone mainstream and reality shows offer endless peeks into the trainwreckishly boring lives of non-fictional privileged people, I don’t think there could be a Wifey. Not one that makes waves the way the book did in its time. The bar for scandal’s been set far too high since the late seventies, for better or worse…

Though it is awfully good fun to play tourist in that era for a few hours, thumbing through one’s dusty old copy of Wifey. 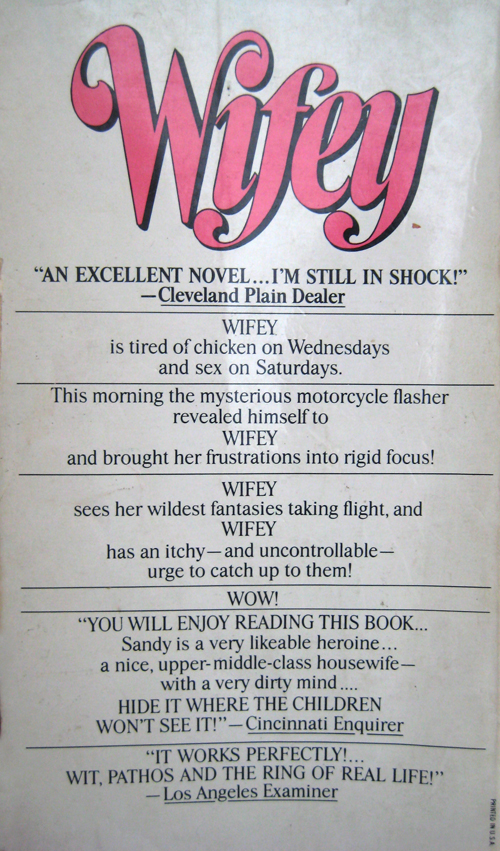