Virtual Shelves, Meta That Matters, and Shades of Should

There are sort of two posts in one today, but they’re related and the second block of thought is pretty short, so…just FYI.

A couple of weeks ago, Laura Bradford tweeted a single line from a book, Erasing Sherlock, that she had signed a decade ago and failed to sell because the work “did not neatly fit into any one genre” (from the Kelly Hale page on Wikipedia). It was eventually published by Mad Norwegian Press.

This book. Is. Amazeballs.

I glommed it in a night—the book hangover that I suffered the next day was the first one I’d had in a long time. With my husband traveling pretty much all the time for work, I cherish my sleep and it takes a seriously excellent book to make me sacrifice a single minute of slumber. But Erasing Sherlock was worth it.

So why am I writing all of this? Is it just to recommend the book to you? Well, that’s part of it. It’s a gripping, sexy, grotesque, thoughtful book, and it is the kind of book that—as mentioned earlier—cannot be classified into a single genre. Which is exactly why you should read it.

Erasing Sherlock belongs on so many shelves, and yet none at all. If there were a shelf for the genre of “Very Good Books,” that’s where it would go. But there isn’t one, even in the meta-tastic virtual shelf world, and that is really the point of this post: that relying on the status quo of existing labels–that relying on labels, in the first place–often causes us to miss out. Cecilia Tan talked about this in the author interview she gave on Wonkomance back in January, saying, “Why can’t a book have everything that’s good about erotica and romance and mystery and science fiction, for example?…labels are only the start of the conversation, not the be-all, end-all.”

But all too often, we are given the label as part and parcel of the end product. Even in today’s digitized world of virtual shelves, it’s too easy to fall into the trap of “This is.”

Our minds—our lovely, complex minds—rarely follow a single track. Look at this video of what fish thoughts look like, for example:

A freakin’ fish. If that’s how fish think, then imagine what it looks like in the human mind. It’s not some single, straight line or the proverbial light bulb blinking on in one small compartment of the brain. It’s a crazy, bleeding, explosive flash that spreads out over a wide area and encompasses so many possibilities in a single instant. It is something to be appreciate and admired, and I love books that pay homage to this complexity by being more than a label.

Labels can be comfortable. Labels can be easy. They can also be constricting and prohibitive and damaging. I looked at the reviews for Erasing Sherlock before I bought it. One of the reviews, in particular, jumped out at me because I was already thinking about the book in the context of genre classifications and labels, and the irony of the review title, “Why, oh why, you female writers?” (from Amazon review of Erasing Sherlock, by user kete) was hard to ignore.

You female writers. There’s a repulsive, sweeping generalization wrapped up in a label. And in the review, the reviewer talks about how Erasing Sherlock is just another “trite love story.” It’s a label party up in there! But the thing is, the book isn’t a trite love story. It contains so many other elements—suspense, mystery…but the reduction by a reader to a single, dismissive classification says a lot about how labels have permeated our thinking.

This book is really well-written. This book is thrilling. But it’s not simply “literary fiction” or “a thriller.” This book…is a Very Good Book. If you like Very Good Books—not necessarily romances or horror stories or even Sherlock Holmes—then you might like this Very Good Book. Go on, give it a try. There’s room for it on your virtual shelf, I know it.

Do any of you have recs of Very Good Books that don’t fit neatly into a single genre? (Even if they’re classified and sold via the vehicle of a single genre, and especially romance.) Please share them in the comments. My fish brain would really appreciate it. 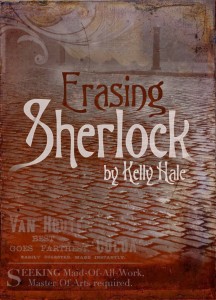 A 21st century doctoral candidate takes on the guise of a maid-of-all-work in 19th century London in order to document the methods of Sherlock Holmes before he gained notoriety. It’s a remarkable opportunity for research in the field, bestowed upon her by a benefactor who has sold his soul for a technology that only works if the devil he sold it to is sufficiently entertained.

The life of Sherlock Holmes is being written by another hand, and maid must become the master if she wants to survive. Because the devil loves a spectacle. The more blood, the better.

It is available digitally on Amazon.

The second, short post (postlette?) is related to classifications and the narrowness of labels. Essentially, it’s about the “shoulds” that we bring to our reading. The views we have of how certain worlds should behave. About what people need to do. What love is supposed to look like. How an author has to write. The Shoulds, Need-tos, Supposed-tos, and Have-tos are often testament to how we’re so much more forgiving of exploration in a world for which we have no preconceived Shoulds than we are of the one in which we live.

I loved the note at the end of Alexis Hall’s Prosperity, where he writes (in character), “Through a combination of divergent physical laws and the ignorance of your scientific establishment, several technologies…were not developed to their fullest extent in your reality, to the detriment of your people and their culture.” I cannot speak for Alexis, but I can say that I laughed out loud when I read that, because in my mind it was a big, Fuck you, “Should.” I don’t want to miss out on terribly wonderful things because they don’t line up with the way Things Should Be.

7 Responses to Virtual Shelves, Meta That Matters, and Shades of Should