On falling in love in Romanceland: A Guest Post by Jenny Holiday

Hey, everyone! Audra here. I want to welcome Jenny Holiday to Wonkomance with a guest post on falling in love in Romanceland. Jenny is the author of a newly-released debut, Saving the CEO, which is a funny, wonderful book in which the CEO is not an asshole and the heroine is a genius and a bartender. Jenny is also a fantastic person and friend! So without further ado, here she is!

I probably started writing romance novels way before I ACTUALLY started writing romance novels. As far back as I can remember, I would spin love stories in my head at night when I was “trying to fall asleep.” Greg Brady and I went on A LOT of dates—until I threw Greg over in favor of Ponch from CHiPS. (Later, as an adult, I was talking to a doctor about my insomnia, and she asked me about my sleep hygiene. The conversation we had resulted in her saying, “Wait. You’re telling me you actively resist falling asleep so you can tell yourself stories?” Um, what’s your point, Doctor Know-it-all?)

What can I say? I’m a sucker for a love story. Later, as an adult, when my late-blooming self discovered romance novels, I quickly realized “romance novelist” was the perfect job for me. I was sort of doing it already, anyway!

What I couldn’t have known, when I started my journey to Romanceland, was that I would fall in love so hard, so many times.

It started with my first critique partners. These were the first people with whom I practiced being who I really wanted to be. For me, saying, “I want to write a book and get it published,” was a bold, scary assertion. It went against my ingrained Midwestern tendency toward self-deprecation. Failure was possible—likely, even. But with these two women, I rehearsed. We all did. We acted like what we wanted to be. Doing that was a shortcut to intimacy. When you’ve shown someone the shitty first draft of your shitty first book, you’re skipping a lot of steps.

Later, I expanded my circle of love affairs to include others: my agent, friends I made online (including and especially Wonkomance’s own Audra North). I feel like the refrain of the past couple years as I’ve made friends in Romanceland and discovered so many simpatico soul mates has been, “OMG! ME, TOO!”

Even though I’m now published, and my books are (I hope) less shitty than when I started, there’s still an aspect of intimacy in these relationships that isn’t present in my real life friendships. It was and still is a bit of a trip to spend time with people who understand that the fictional worlds we inhabit are as important to us as the real one.

As a thought experiment, I’ve tried to imagine if I had become a capital-L literary novelist or, I don’t know, a memoirist. Would I have lost my heart so many times along the way? My sense is no, and I’ve been trying to figure out why. I think it’s because Romanceland is populated with a much higher proportion of feminists than the real world. In a world where the “f-word” has somehow become synonymous for man-hating, it’s an unusual thing we have going here in Romanceland. (Honest to Goddess, the next person I hear say, “I’m not a feminist, I’m a humanist,” or “I’m not a feminist because I think everyone should be equal” is going to get dropped kicked across the room.) In other words, Romanceland = my tribe.

Don’t underestimate the power of your tribe + the intimacy of letting someone into your fragile fictional worlds. For me, it’s a potent combination, and one that I thank my lucky stars for every day.

So now Greg Brady doesn’t have my whole heart. It’s been subdivided a few dozen times, and he’s sharing it with a bunch of awesome ladies.

About Saving the CEO 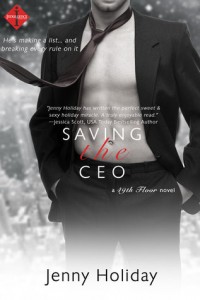 Real estate mogul Jack Winter has rules. Lots of rules. After all, a man doesn’t build an empire without a little discipline. And on page one of the rulebook? Don’t sleep with your employees. Especially when there’s a multimillion dollar real estate deal at stake…

Luckily for Jack, Cassie James isn’t really his employee. She’s a hot bartender who just happens to be the math genius he needs, and if they share a wicked chemistry? Well, that’s just a sexy little perk. So they strike a deal: Cassie helps Jack with the merger. And until the deal goes through at Christmas, they can indulge every impulse they desire.

But the more rules Jack makes, the more he seems to break…

Jenny Holiday started writing in fourth grade, when her awesome hippie teacher, between sessions of Pete Seeger singing and anti-nuclear power plant letter writing, gave the kids notebooks and told them to write stories. Most of Jenny’s featured poltergeist, alien invasions, or serial killers who managed to murder everyone except her and her mom. She showed early promise as a romance writer, though, because nearly every story had a happy ending: fictional Jenny woke up to find that the story had been a dream, and that her best friend, father, and sister had not, in fact, been axe-murdered.

From then on, she was always writing, often in her diary, where she liked to decorate her declarations of existential angst with nail polish teardrops. Eventually she channelled her penchant for scribbling into a more useful format. After picking up a PhD in urban geography, she became a professional writer, spending many years promoting research at a major university, which allowed her to become an armchair astronomer/historian/particle physicist, depending on the day. Eventually, she decided to try her hand again at happy endings–minus the bloodbaths. You can follow her on twitter at @jennyholi and @TropeHeroine or visit her on the web at jennyholiday.com.

This entry was posted in Guest Post and tagged friendships, jenny holiday, romancelandia. Bookmark the permalink.

5 Responses to On falling in love in Romanceland: A Guest Post by Jenny Holiday