A Dewy Pink Rose By Any Other Name 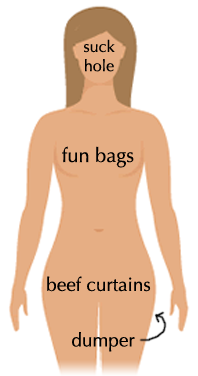 Just do it! Use labia!

I was in this exact quandary a couple of weeks ago. Too many lips, and I was worried labia was too clinical, a mood-killer. So I ran an informal Twitter poll to see what my bitches had to say.

Turns out, labia’s cool. Like clitoris, it’s one of the prettier anatomical terms, and the majority of respondents (check me sounding all scientifical) said it wouldn’t disrupt their reading. I prefer lips and clit, myself, but we quickly overuse our favorites, so I’d like to offer a run-down of acceptable synonyms for the various and sundry human underbits. This is a combination of my opinions and those of friends, writers and readers alike. Bear in mind a) I write contemporary erotic romance, b) my readership is largely female and they don’t blush easily, and c) my characters tend to be candid, if not outright potty-mouthed. My audience may very well not be your audience. Also, I’m going to keep these examples heterosexual, merely for the sake of simplicity.

We’ll start at the top—mouth. You’ll burn through the basics in a kissing scene in no time. Mouth, lips, tongue, kiss—all spent in the first two sentences. We don’t have any sensual slang for the mouth [see also: pie hole] so you have to employ some euphemisms: his greedy assault; her steaming exhalation; the sweet violation (yeah, actually, go ahead and call every sex act a sweet violation). And when you’re out of nouns, refer to the parts as the person (her, him) and focus on the actions: he claimed her hungrily; she welcomed his intrusion, and so on. Oh and now seems a good time to suggest that no orifices should ever be referred to as his or her wet hole. Yeah…no.

Moving swiftly southward: breasts. As with the nursing adage, breast is best. Isn’t that a lovely word? Boobs is too juvenile. Tits can work, but generally only if you’re in male POV and don’t mind your hero sounding like a bit of a horny douche. Fun-bags, dairy pillows, boulders, knockers, jugs, milkers…need I even say it? To be honest, there aren’t a ton of great options. Mounds is weak. Globes is terrible—even fake breasts aren’t spherical. Bosom…maybe try that, once every five books, but it’s pretty old-timey. If the reader knows where the hero’s hands are at, flesh isn’t too awful. Again, you may want to humanize the part as “her” and let the verb be the explicit element: he cupped her; the weight of her in his hand; he fondled her through her top.

Nipple is an adequate word, and your best option, if not dripping with sex appeal. Also half-decent: peak, point, bud, nub. Like boobs and tits, nips is doltish. Avoid having nipples pebble. That’s as overdone as heroes named Griffin. Let them draw tight instead, or simply stiffen under his touch. It was also decided on Twitter that a guy “suckling like a hungry babe” is mega-squicky.

Next up: abdomen. Abdomen and abs are acceptable, the former flirting with being too clinical, the latter with being a bit…I’m not sure. Bro-ish? Abs are something you spritz with Axe Bodyspray, but they’ll do. Belly is good, though its default tone is one of softness, so if he’s ripped, you may want to mention it’s his taut belly. Middle is okay, but offers nothing in the way of implicit description. Six-pack is explicit but also pretty cheesy—definite Axe territory. Stomach is technically incorrect, referring to an internal organ, but we’re so used to terms like “a flat stomach,” no reader will think she’s admiring the firm contours of his digestive system. Don’t use gut in the bedroom—too negatively evocative. He can feel desire or trepidation or a bean burrito stirring in his gut, but leave it at that.

Before we dip down to the exciting bits, let’s pause at the hands. Hands are great—lots of perfectly acceptable sub-elements and configurations. Get specific, and swap in palm, finger, fingertip, nails, knuckles, fist, grip, touch. And since the hand is the most likely part to do these things, use actions to mix things up: cupped, gripped, squeezed, grazed, teased, held, circled, and so forth. I mean, there’s no reason to write, “He cupped her in his hand.” That’s like saying, “He chewed the food with his teeth.” If it’s implicit, save “hand” for when you really need it. And if both hands are getting up to stuff, don’t differentiate by saying left or right. Those distinctions are distracting, making readers pause to check that they’ve got the mechanics straight. Mood-killer. Instead say his other hand or his free hand, or the hand fondling her fun-bag.

Next up: pubic hair. Tricky, but happily one of those details you can omit if you want—readers don’t expect to have pubic hair described. If you do need to mention it, plain old hair (if the region is implicit) is fine, or curls. Other terms I’ve seen used are nest and thatch, which I suspect would divide an audience in their squickishness, and distract many a reader. Please file landing strip in the same bro folder as tits, jugs, and six-pack.

Hey, we’ve arrived at the junk! So, how about wangs? First off, don’t use wang. If your targeted readership is female, don’t use wang, schlong, dong, prick, boner, pole, stiffy, rod, love bone, any label belonging to something hanging in your garage, meat, beef, little guy, etc. Your best slang bets are cock and dick, and don’t overlook erection or even hard-on. Quite a few decent euphemisms, too: his length; his hard or driving flesh; his pulsing excitement. Manhood’s okay, though curving slightly toward the old-fashioned. Penis is best when referring to the organ in a non-sexytimes context (my default setting tells me penis refers to the soft state; you pee with your penis, you bone with your cock). For the head, I’m down with head, crown, and tip. Helmet? Neutral. Bulb and anything referring to a mushroom? Not so much.

Squirrellier still are the balls. And in my opinion, balls is the best word for them. Testicles isn’t sexy, and neither is sac or scrotum or nads or nuts or jewels. There simply isn’t a great, evocative, sensual term for those puppies. But if your heroine is cupping down there, chances are your reader will know what part she’s handling.

We’ll break the lady-area into three sections: clitoris, vulva (the outside bits), and vagina (the part you stick it in).

Clitoris ain’t bad. It’s sort of pretty, and its shortened version, clit, is also fine in my book. When you use those up though, where to go? I’ve relied on nub before, and smeared Vaseline on the lens and softened it all to “he stroked her arousal” or “that most sensitive spot.” Personally, I don’t like bud, and I really don’t like button. As someone said on Twitter, it made her picture a remote control. [Note to self: refer to clitoris as self-destruct button in upcoming sex scene.] Need I say, no little man in the canoe. Another I see, especially in historical romance, is pearl. That’s a bit frou-frou, but I wouldn’t sigh aloud with annoyance if I read it in a sex scene. If anyone has further acceptable terms for clit, please, do tell. I could use them.

On to the vulva! Don’t use vulva, first off. A depressingly small percentage of people know what it is (it refers to the outside bits, basically—both sets of labia, mons, the opening of the vagina, and the aforementioned clitoris) and it’s not a super nice word. Vulva. It flops off the tongue like a damp towel. Which is a shame, because it’s like, the best thing ever. The meat—har—of the area are the labia. As I said, the clinical word in this case is passable. It’s actually Latin for “lips”, and lips is great, too. In erotica, you’ll see the term pussy lips now and again, and I hate it, far more than I hate netherlips. Folds isn’t bad. Crease or cleft can work, nice alternatives to the too-blunt slit. Petals…see pearl, for clitoris. If you want avoid naming the area, some verb-based strategies that work are things like, “he parted her softly” or “he stroked the length of her plump flesh.” Do I need to even tell you what not to call them? Anything involving flaps—piss flaps, mud flaps, meat flaps, and no, not beef curtains either.

How about that vagina? I don’t love the clinical term. I’d prefer to leave it in the gyno’s office, though again, I wouldn’t toss the book across the room over it. In erotica, it’s generally acceptable to use pussy or cunt. It all depends on your POV. If your heroine would never in a million years use those words, you shouldn’t either. Let the POV character choose the term, always. As alternatives to the clinical and the crass, the hero can also penetrate the following: her slick heat; her welcoming body; her depths; or, simply, her. Some words I’d put on the do-not-call-it list: twat, snatch, anything involving tunnels or channels or velvet, and most anything with hole. Also wildly unpopular? Womb.

What what, about the butt? For the outer area, butt’s cool. Ass works, if that’s what your POV character would call it. Backside, good. Cheeks is preferable to lobes. Rear-end and bum and booty are a bit doofusy, and buns to me screams 1985. Please, no badonkadonk, because 2002 is the future 1985. I wouldn’t recommend dumper, either. I don’t need to tell you why. As for that contentious bit between the cheeks, all up in the cleft? When I write male-male erotica, I go ahead and say asshole, because my guy characters are filthy fuckers. A female character might be less inclined to think of it using that term. Here, hole may have to suffice, or soften it to tight entrance or puckered opening. Yeah, the options aren’t great, but come on—you’ve committed to writing anal. Now’s not the time to get coy. Still, the clinical options are grim—anus, rectum, sphincter, prostate. No. Also not sexy: back passage, rear entrance, service elevator. And I don’t even need to tell you, but steer clear of anything that reminds readers what that orifice is actually there for (don’t make me reference the shocker.)

Oh, and what to do with all these parts? I recommend fucking. Or making love, if your characters are feeling it. He can plumb her depths or they can use one another’s bodies. Possibly screwing and maybe getting off, but hopefully not boning or boinking or bumpin’ uglies or schtupping or tapping that ass or making whoopie [cue Newlywed Game theme].

So there you go. Bear in mind, this entire topic is massively subjective. You may use pussy and totally disgust Reader A, but another author could call it a velveteen love glove and she’ll be swooning like me at an illegal cage fight in the basement of a disused factory in Detroit. First and foremost, turn yourself on. Ignore everything I’ve said and use the words you think are hot. But please, don’t use a word that feels off just for the sake of avoiding an echo. Reading his turgid manhood is far more distracting than two cocks in one passage [bonus har].

Now please—share your most loved and hated terms in the comments!

27 Responses to A Dewy Pink Rose By Any Other Name