Time for a little shameless self-promo here. Well, not shameless – I always experience a bit of shame when doing this – but brazen at least.

*cues trumpets* THE THEORY OF ATTRACTION drops July 9th, which is Monday! Only four days from now! Let us all dance a happy anticipatory dance! Because if there’s one thing the hero of this book has, it is wonk, in abundance. In fact one of the discussions that led to the formation of Wonkomance itself centered around Ivan, the kinky rocket scientist.

I think Ruthie Knox summed Ivan up best when, after reading an early draft of the book, she said, “What a weird, kinky fucker he is.” And it’s true. He is weird. He is kinky. He is a fucker, sometimes in the metaphorical sense as well as the literal one.

Ivan’s more than just a quirky-nerd-as-seen-in-books, is the thing. I made every effort to model him after some of the nerds and geeks I know in real life (no, he was not originally patterned after Sheldon from The Big Bang Theory, the resemblance only occurred to me when I was well into writing the book, though I won’t deny I love me some Sheldon and there’s certainly a similarity), many of whom are flat-out hopeless when it comes to social interaction. The guys, especially. Some of them can barely finish a sentence…at least not a sentence that’s fit for polite conversation. Their feet reside in their mouths more or less permanently. Fortunately they mostly hang out with other nerds, which minimizes the impact somewhat.

BUT…get one of those guys talking on a subject he knows well (and if he’s a nerd, you can bet there will be a few subjects he knows better than just about anyone), and he will be transformed. Let him at an experiment where he’s really invested in the outcome, and he is a different man. Focus, intensity, a voracious hunger for the topic of his interest…a nerd in the midst of a passion can be a beautiful, terrible creature. And just as anyone tends to seem sexy when they’re doing what they’re competent at, a nerd can suddenly seem immensely appealing when he demonstrates this astonishing change from awkward conversational bumbler to brilliant lecturer or genius inventor. I wanted to exploit that sea change phenomenon with my nerd hero, and once I’d stumbled upon the idea of a kinky hobby as the topic of nerdy interest…well, the book just about wrote itself.

For Ivan, one of his transcendant passions is D/s. Sometimes his nerdiness shines through, of course. His scientific word choices, his compartmentalization, none of that ever goes away entirely, despite training and self-discipline. But for the most part, kink transforms him. Kink and rocket science, of course. 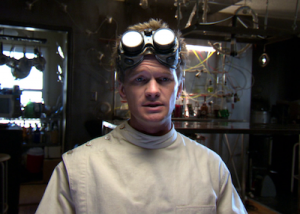 Did I mention I find mad scientists hot? The downside of this particular flavor of hotness is, as some early reviewers have pointed out, the transformative effect only lasts while the passion is engaged – and Camilla, the heroine, raises legitimate concerns about Ivan’s ability to cope with the realities of a long-term relationship outside the bedroom. For this reason I see the book as a HFN, not a true HEA, because it’s entirely possible a true HEA is not in the cards for Ivan and Camilla. As a professor, or as a Dominant, Ivan is swoonworthy; as a boyfriend, a husband prospect, he would be a much tougher sell. This couple would have a lot to work through, and Camilla in particular would have to face some home truths about her own expectations and how Ivan might never be able to meet certain emotional needs. On the other hand, she’s a pretty big geek herself, so the cost-benefit analysis might work out for her.

But mostly: hot kinky nerd sex! And who doesn’t love that? Pre-order a copy today at any one of a variety of places:

Oh, yeah, and I guess RT pretty much liked this book or something. So it’s got that going for it, in addition to the aforementioned hot kinky nerd sex. Woohoo!

Who is YOUR favorite hot nerd and/or mad scientist? Raise your hand if you would totally do Gene Wilder as either Willy Wonka or Dr. Frankenstein!

Areas of wonkery: geek culture, kink/BDSM, science for those who are not mathematically inclined, educational psychology. Read more >
View all posts by Delphine Dryden →
This entry was posted in Certified Wonktastical, Shameless Self-Promotion, Writing Wonkomance. Bookmark the permalink.

8 Responses to “What a weird, kinky f*cker…”