“I found no humor, only desperation and pathos.”

So begins one of a number of one-star reviews for Anne Tyler’s The Accidental Tourist on Goodreads, where the novel has nearly 25,000 ratings. The Accidental Tourist is one of my all-time favorite novels, and while it’s not a romance novel — I’d call it literary fiction with romantic elements — it’s definitely high on my list of formative wonk. And yet I can understand why people would give the book only one star. There aren’t a lot of soft resting places or pleasant sentiments in it. This is a novel — a brilliant novel — about grieving and love and the quiet collapse of a life. And it’s also funny, in a very off-beat way. It’s my idea of wonkomance at its best. 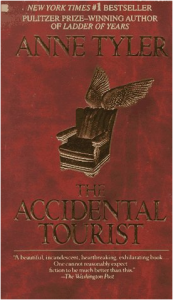 The Accidental Tourist came out in 1985. I must have read it for the first time in the late 1980s or early 1990s, when I was around ten years old. I was forever doing this — reading books that were too old for me and loving them for reasons that I cannot understand now and could not have articulated then. At least this one didn’t have any wild sex in it. The Accidental Tourist is not a sexy book, nor is it a particularly romantic one. The story is told through the point of view of the protagonist, Macon Leary, who is rigid, dour, and relentlessly unhappy.

And yet something about this novel pulls me back again and again. I think of it as a book about a man who’s adrift in his own life. A highly unlikely love becomes the anchor that helps him find purpose again.

The novel begins just after Macon’s wife of twenty years has left him. They had a child together, a twelve-year-old boy who was shot in a senseless act of random violence while he was away at summer camp. Macon doesn’t know how to cope with this loss — how to behave in the wake of such a catastrophe — except to carry on as he always has. One of four children of a feckless, flighty mother, Macon and his siblings were raised to cope. They all find life rather senseless and difficult, and they respond to it with stoicism and planning. In one of several metaphors for their condition, none of the Leary children has a sense of direction. They are forever leaving home and getting lost on the way to the hardware store, and then spending hours trying to find their way back again. What happens to a man like this when he loses the son who is the most joyful, most important, most beloved thing in his life? 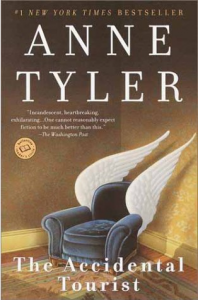 He grieves. Badly. In the reading guide at the back of this novel, one of the questions put to Anne Tyler is why so many people in the novel are unhappy with the way Macon grieves his son’s death, and Tyler answers, “Because the way Macon is grieving doesn’t look like grieving at all.” He tries to give away his son’s possessions at the funeral, asking a neighbor with a young son whether he’d like Ethan’s bike. He doesn’t cry. He just . . . keeps going. And when Macon’s wife leaves him, he gets even worse, settling on all these systems to make his daily life more efficient and sensible. He strips the covers off the bed, folds sheets in half, sews them up, and sleeps on the bare mattress in the sheet sacks he’s made, convinced this produces less waste and is all-around more sensible. Instead of doing laundry all the time, he showers at night while stomping on his dirty clothes in the bottom of the shower. He sets an alarm clock timer to make him popcorn so he can eat it in bed, thus solving the problem of breakfast before he rises in the morning. These early scenes in the novel are humorous, ridiculous, and pitiful. Desperate and pathetic. But they’re also very touching.

Macon has a dog, Edward, who belonged to his son, and whereas Macon is gentle and mild-mannered in his grief, Edward is furious. He snarls at strangers, and then he begins to bite. As the novel progresses, the dog’s behavior worsens until Macon has no choice but to bring in a trainer, a woman named Muriel whom he met at the kennel where he boards the dog. A strange woman with big hair and bizarre thrift-shop clothes who comes on to him despite his complete lack of interest, and who pursues him — awkwardly, despite his passivity in the face of her pursuit — at the same time that she gives Edward harsh lessons in dominance. 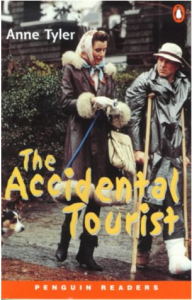 Because Macon doesn’t particularly like Muriel, the reader finds it difficult to like her, too, at first. But she’s the only person in the book who really talks to him as if he’s alive and worth talking to — the only person who doesn’t feel as if she already knows everything he has to say. Macon is drawn to her, and she wants a man in her life — wants someone to share his opinions, to help her with her sickly, unappealing son, to eat her food and sleep in her bed. And Macon, I think, wants to feel like a man. He wants to be competent and useful to someone. So they fall into this unlikely, undefined sort of relationship where even when he’s essentially moved into her house and become friendly with all her neighbors and acquaintances, it’s difficult to believe that he actually loves her, or that they have any business spending time together. Macon’s siblings are understandably surprised and appalled by Muriel. The wife he’s separated from can’t quite believe that he’s really with her. And neither can Macon.

Yet they have something together, Macon and Muriel. I hesitate to call it love, because it isn’t marquee-lights, crazy-hot-sex, over-the-top romance love. It’s quiet and often subterranean. But it’s also a real thing, where very little in Macon’s life is real. We learn over the course of the novel that he’s always felt like a pretender in his own marriage, as though his wife has never actually known him because he’s been performing the version of himself she was initially attracted to. But for Muriel, he doesn’t perform, because he’s too caught up in his grief to bother trying to impress her. And yet she wants him anyway, and he finds, in the end, that he wants her, too. He discovers that he likes the man he is when he’s with her.

For elusive, inexplicable reasons, The Accidental Tourist is a formative romance for me. That idea — that two people who are broken and incompatible can come together because they like who they are with each other, rather than the people they’ve been trying to be in their separate lives — is one that’s worked its way into a recent draft of a novel, and I’ve also got a future book plotted out with a rather dour, rigid, suit-wearing hero and an eccentric, dog-training, oddly behaved heroine whom the hero doesn’t quite like, at first, but can’t get enough of. Which I think means the book imprinted on me, somehow, and shaped how I feel about romance.

How about you — Have you read The Accidental Tourist? Or, if not, what books were formative wonkomance for you?

8 Responses to Formative Wonk: The Accidental Tourist by Anne Tyler