Jondalar: Father of All Alphaholes

I always tell people that the first romance novel I ever read was a Loveswept — Joan Pickart’s Warm Fuzzies, which has a hero named Acer Mullaney who talks to a six-foot-tall teddy bear created by the heroine, Lux Sherwood. And it’s true, this was my first romance novel, if you understand “romance novel” in a narrow sense.

Oh, Jondalar of the Zelandonii. You did give me some tingly moments. 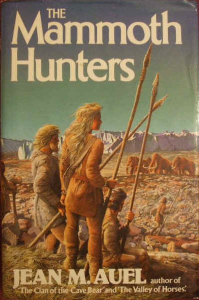 The fun thing about the age of social media is that you find out that all the books and movies you secretly obsessed about as a precocious girl of ten and never mentioned to anyone, ever, were the exact same things all your Twitter friends obsessed about at the same age. So it is with Jondalar. I have a lot of romance writers and romance readers in my Circle of Twitter, and when I happened to mention Jondalar a few weeks ago, my Tweetstream exploded with fond reminiscence.

Dude, a lot of us were reading Jean M. Auel books back in the day. A lot of us. And it seems that most of us now write romance novels. Go figure.

For the uninitiated, Jondalar is the hero of Auel’s epic Earth’s Children series, which takes place way back when Man had fire and hunting but not metallurgy or the printing press. As Auel would have it, there were two types of two-legged, language-possessing humanoids on the planet at the time, the Flatheads and the Others. The Flatheads were an older, less evolved species. They spoke in signs and had an elaborate ritual culture. Also, they only had sex doggy-style, at the command of the menfolk, who were named things like Broud and Durc. The Others were, as far as I can tell, just like white Europeans, but in animal-skin leggings, and with goddess worship and a lot of sexytimes instead of all that annoying Puritanical crap that came along later. 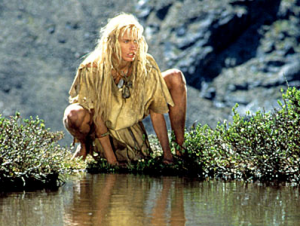 Ayla, as played by Darryl Hannah. Because why not? She’s blond.

Ayla, the protagonist of the first story, Clan of the Cave Bear, is one of the Others who is found and raised by Flatheads. They think she is ugly, stupid, and clumsy. One of them hates her and serially rapes her. She has his baby, who’s declared a freak and almost left for dead, then near-universally despised. It’s a grim story, and at the end, Ayla gets exiled.

The second novel, The Valley of Horses, is the one where Ayla lives by herself in a valley, domesticates a horse, weaves baskets, tames a lion, susses out how babies are made (hint: it involves semen, not spirits), invents the whole idea of using flint to start fires as well as a variety of other useful household tools, and finally meets Jondalar when her lion kills his brother and strands him with a gaping thigh wound. Luckily, Ayla is a healer. If you rolled your eyes and said “of course she is,” you’re beginning to get the idea.

I never realized this before, but Ayla is a classic romance novel heroine. She’s very smart, but she thinks she’s stupid. She’s tall and muscular and stacked, but she thinks she’s ugly. She’s not a virgin, but she doesn’t understand that sex can be pleasurable. She’s used to being despised and rejected, but she’s totally industrious, competent, and just generally the kind of gal that a guy would want to keep around. She’s lonely and available for the right fellow to come along and plant his flag in her, explorer-style. 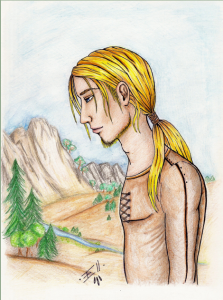 Before he was Jondalar the Alphahole, he had an emo teen phase.

And Jondalar . . . oh, Jondalar. The more I think about it, the more certain I am that Jondalar was the Original Alphahole.

Like Ayla, Jondalar is good at everything. He’s the best flint-knapper in all creation, the best spear-thrower, the best virgin deflowerer (iz totally a skill), the best sibling, the best-looking, the best story-teller, and he has the best schlong. It’s a Giant Schlong. No woman can ever take his entire schlong. You know where this is going. 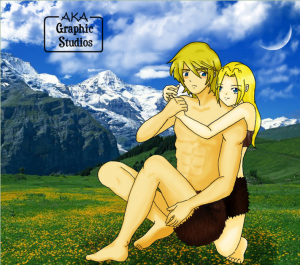 I can hear him saying, “Jondalar doesn’t spoon, baby.”

But as chance would have it, Jondalar, despite being an all-around fabulous guy, is kind of a dick to Ayla. He tries to be nice to her, but she won’t talk to him, and he doesn’t understand her behavior, and he hates being cooped up in her tiny cave while she brings him tea and carries off his waste products and saves him from dying of the enormous gaping lion wound in his thigh. (Oh, and Ayla also invented sutures. Natch.) Then, one day, as his recovery is proceeding apace, Jondalar notices that Ayla’s not bad looking, so he plays grab-ass with her, and she gets all freaked-out and blushing (because she’s a victim of serial rape). That bewilders and upsets him. But she’s so hot, it’s hard for him to keep his hands off her. In fact, it’s starting to look like they just might do the deed when Ayla tells him that she was raised by Flatheads, had sex with one, and gave birth to his baby.

That’s when he calls her “an abomination.”

Cue four hundred pages in which Jondalar desperately wants to have sex with Ayla but can’t because she’s soiled goods.

Now, of course, in the end, he gets over himself, and he introduces her to the art of Pleasures (yes, they’re called that), and there’s a lot of sex that sure did seem graphic at the time. Here’s a moment I remember vividly from the very first sex scene, which involves tongue-circles on the boobs: 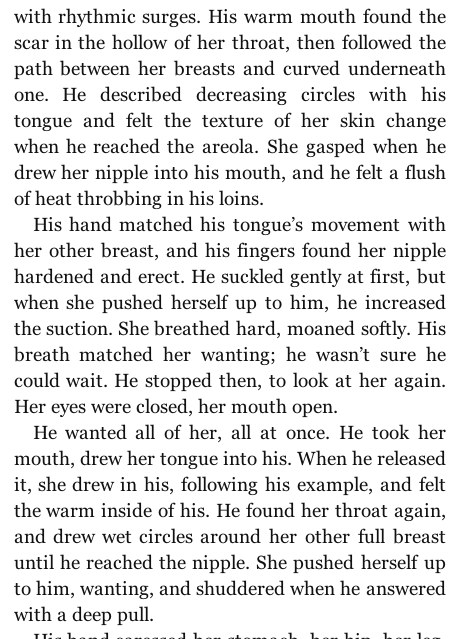 Not too shabby, Jondalar.

And here’s the moment when it becomes clear that the Giant Dong of Jondalar fits fully into the Capacious Sheath of Ayla: 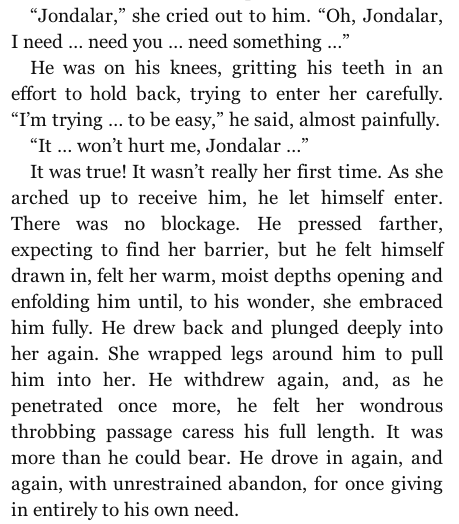 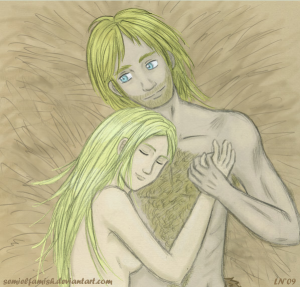 <–and then afterward, the cuddling.

True story: I took this book to Girl Scout camp. One of the counselors saw me reading it, and she said, “Isn’t that book kind of . . . graphic?” And I said, “Yes.” But the truth was, I had no idea what “graphic” meant.

Returning to the subject at hand: Jondalar. He is awesome at everything, petulant on his sick bed, inclined to be handsy and insensitive, rather dense about obvious things, totally dickish on the subject of Ayla’s soiled-ness, and a stickler for foreplay before the plunging. That makes him an Alphahole, right? Kind of a classic Alphahole? Possibly the classic alphahole, since clearly Cave Sex pre-dates all those regencies and even all those medievals?

Yes. I have found the Father of All Alphaholes, and his name is Jondalar.

The longer the series goes on — and it’s still going, and the books keep getting longer and less readable — the more awful he gets, because his primary function, plotwise, is to Be Jealous of Ayla for No Particular Reason. Indeed, Jondalar’s irrational jealousy is the primary conflict engine of every single book that follows Valley of Horses. He is a total whiny baby.

And yet I loved him so much, back then. I still kind of do.

You never forget your first, I guess. And I’m just going to go ahead pretend that it’s a complete coincidence that the boy I gave it up for in college was nearly seven feet tall. And blond.

23 Responses to Jondalar: Father of All Alphaholes