A guest post by the lovely and hilarious Karen Booth! Follow her on Twitter—I double-dog dare you!

When I was a little girl, I loved to draw pictures of myself as a princess. You know, the cone-shaped hat with the scarf draping from the point, poofy skirt with the crisscross ribbons on the bodice? If I was sure of anything, it was that I would look amazing in that get-up. I even liked the idea of the prince charging in on his trusty steed and doing mysterious things that involved ripping said bodice, but the other stuff…the way princesses got to their Happily Ever After? Much of that seemed like bunk.

I think that’s why I found Fractured Fairytales on Saturday morning cartoons to be so completely awesome. For you young-uns, there was a time when there were only seven television stations and kids’ programming was limited to one three-hour block a week. You can look it up on Wikipedia.

Fractured Fairytales were goofy, twisted versions of the classics like Cinderella and Snow White and Beauty and the Beast. I loved Rapunzel as an airhead with a singing voice only a mother could love, or the Frog Prince as a prince who thought being handsome was stupid. He really just wanted to be a frog.

Several decades after my days of eating cereal in front of the TV (okay, I still do that on occasion), I got the idea for my first novel, Bring Me Back. In my head, I saw Claire, a struggling music journalist and single mom. After years of token assignments, she lands a career-defining interview with Christopher Penman, the dangerously charming British rock star she was obsessed with in high school. It would be a modern-day fairytale; the stuff born of nights spent practicing make-out techniques with the pillow.

From the start, I was surprised by the way the story was coming out, but I went with it because I figured forward momentum was good. Claire was excited by the romantic idea of meeting Christopher, but the reality of the situation didn’t have her jumping up and down. There was no squee-filled phone call to her sister, no bragging about it to her fellow writers. She was facing this opportunity with pangs of inferiority, butterflies and dread. This was not princess behavior. I liked it.

As I continued to write, I learned one of those writing lessons you have to figure out on your own—let the characters do what they will, let them be who they are. I accepted and embraced Claire’s cynicism and stubbornness and she rewarded me for it. My fingers couldn’t type fast enough. From Claire came the story, a fractured and imperfect fairytale.

And so, yes, my princess is on the brink of forty, a single mom by accident but also by choice—her daughter’s dad was never Prince Charming in the first place. She’s not afraid to shush her drop-dead gorgeous prince in bed, even if he is a dream come true. She can’t help it. She doesn’t like sex talk. Hell, she doesn’t even get into that bed without some serious time spent wondering where exactly his penis has been all these years. It’s a legitimate question. And it doesn’t mean they can’t have their Happily Ever After. 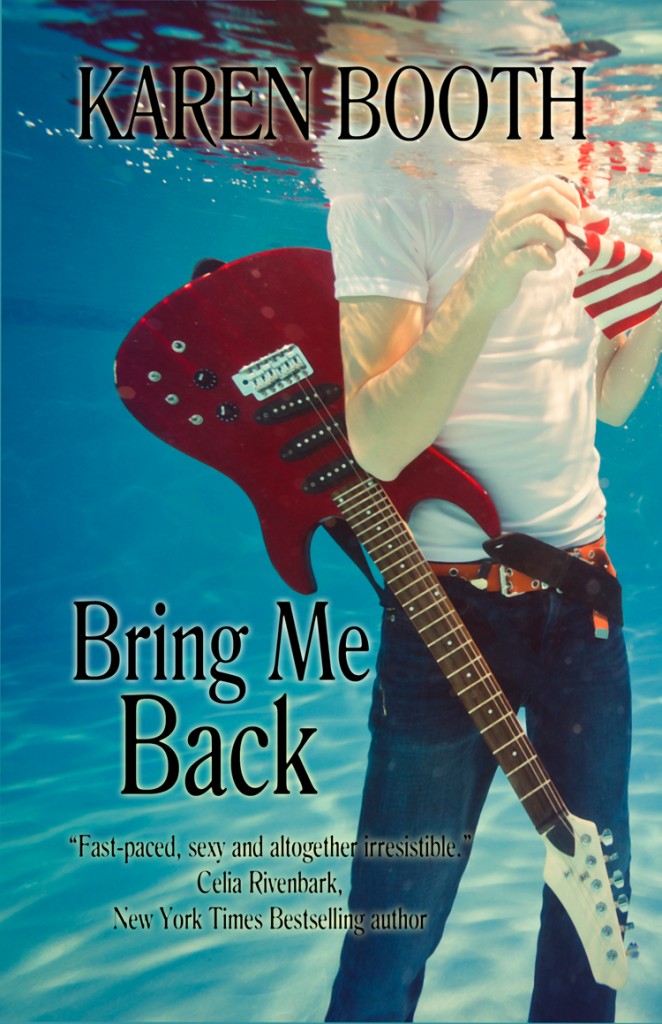 Music critic Claire Abby is a single mom dreading her daughter’s departure for college and worried that turning forty will leave her career running on fumes. She’s floored when she lands a Rolling Stone cover story on 80s British rock legend Christopher Penman. She spent her teenage years fantasizing he was her boyfriend.

In person, Christopher is everything Claire feared he’d be—charming, witty and unwilling to address the rumors he’s dodged for a decade. Still, she contains her adolescent fantasies and manages to earn his trust, unearthing the truth and the devastating secret behind it. His blockbuster story is her first priority when she returns home, a nearly impossible task when Christopher starts calling and flirting. She knows she should maintain a professional distance. She knows she should focus on the story. She knows it would be best to simply walk away. But how can she say “no” to the man she could never forget?

Karen on the web

Add Bring Me Back on Goodreads