Enduring Wonk and the LBD 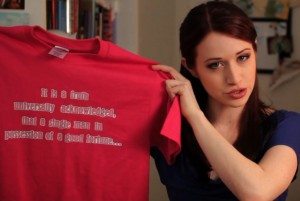 Ask a random sampling of romance fans for their favorite “classic” titles and chances are high that many of them will say “Pride and Prejudice.”

Then a certain percentage of the rest will roll their eyes, and eventually carnage could ensue. Really, you should be careful throwing loaded questions at random romance fans.

But if, like me, you’re among the fans, you really need to check out The Lizzie Bennet Diaries (if you aren’t already hooked on it like the sweet, sweet addictive video crack that it is). It is a modern retelling of the story in the form of a vlog by Lizzie Bennet (with guest stars), and it’s brilliant.

The short reason to watch it: It’s hilarious, and I hear that’s true even if you don’t know the original book well. And since it’s in serial form (and the modernization has created some opportunities for surprise and spoilers) you get the fun of playing along on twitter as the story unfolds (yeah, there’s a twitter RP to accompany the videos). If that’s reason enough, go now! Go watch! Get caught up quickly, because things are just getting really interesting!

The long reason to watch it: like I said, it’s brilliant. The casting is inspired. The producers and writers have a really deft hand, a stunning grasp of the source material, and are masterful at balancing all the comedy, awkwardness and poignancy. And it’s maybe the best example I’ve ever seen of cutting right to the heart of why people continue to love this story. At its heart, though many an English major would love to argue this point, this book isn’t about the constraints society puts on our choices, or how we are a product of our times. It isn’t about a fledgling proto-feminist Lizzie, and it isn’t even really a cautionary tale about Lydia and the evils of straying from the path. It is a romance. It is about the way love persists despite all the other societal crap, often despite our best intentions and sometimes even our own best interests. And sometimes that screws us completely, and sometimes it works out well, but either way the love is all that matters in the end. Even wonky love between two characters who are (let’s face it) not behaving very well throughout most of the story.

The LBD has updated the externals, but the core dynamics of the story are still the same. They are attracted to one another (kind of), infuriated by one another, have vast misconceptions about one another that are supported more by emotion than fact. Neither of them wants to back down from an established position. But love conquers all. Or I assume it will; so far, we’re only just a little past the part where Lizzie visits Pemberley again and runs into Darcy unexpectedly.

Along with some of the other characters, Lydia also has her own vlog – now partly coopted by George Wickham. It’s increasingly hard to watch, because you know no good will come of it. But it’s mesmerizing. Oh, Lydia.

Wonko favorite Courtney Milan has a lively tumblr upon which she discusses the LBD, probably far more articulately than I could ever hope to. So check that out too!

I leave you with Jane’s portrayal of Darcy fake-texting to avoid interaction…which will make much sense after you’ve seen the LBD :-)

One Response to Enduring Wonk and the LBD