So this happens all the time. Somebody here posts something, and either the post or the comments get me thinking.

In this case the post was Ruthie Knox’s Aim for the Middle (Oh, and Also, There Is No Middle). In the comments, Sherri Porter and Sarah Wynde were discussing shame and enthusiasm, because shame is all about rule violation and Ruthie wrote, “I think enthusiasm kind of crowds out rules, so there’s no room left for them.” This is why the Romantic Times convention is the happiest place on earth, by the way. Sarah mentioned the Id Vortex, which immediately made me think of Charlotte Stein’s deliciously filthy book, All Other Things. Charlotte is for some reason inextricably linked in my mind with Michael Fassbender—I don’t know why, I don’t question it. So then I had to go watch Shame because it seemed the thing to do. Then somebody on twitter mentioned Brené Brown (thank you Doren Cassale and/or Megan Mulry), who did two amazing TED talks on shame and vulnerability. And at some point in that whole round of shame-related research, I read the original Id Vortex post again and really started thinking about how shame can be delicious and maybe even transcendent, and that whole stream of consciousness is a perfect example of why I love this blog.

Okay, lemme back up.

The Id Vortex is this great concept used by fan writer Ellen Fremedon to describe what so much fan fiction is about—tapping into all that stuff that, when we read it in a fic, ruins our childhood memories in the worst/best possible way. Stuff that’s obviously compelling, universal material, despite the fact that we all agree it’s horribly wrong (she used the term in the context of a Star Trek Mirror Universe/M*A*S*H crossover slashfic involving slavery, and you can use your own id to imagine specifics). In fan fic, Ellen Fremedon suggests, “we’ve all got this agreement to just suspend shame.” We know we’re not writing or reading it for literary merit, in fact we know it’s often deliberate wank fodder, so the usual rules of professional fiction vis-à-vis sex and social norms and other taboos don’t apply. We dive right into the good stuff, smashing fandoms together, hopping genres with abandon, shipping and slashing improbable and sometimes even illegal couples, subjecting familiar characters to all manner of outlandish lewdness, just because we find it hot and/or entertaining. She goes on to ponder “what the effect on, if not mainstream literary fiction, at least on mainstream genre fiction is going to be, when the number of fanwriters taking that toolbox with them into pro writing reaches critical mass—which I think it’s going to, in the next decade.”

Brené Brown researches shame, which has got to be among the strangest jobs ever. If you haven’t seen her TED talks, go watch them. A key component of shame, according to Brown, is vulnerability. Unlike guilt, which deals with our feelings about what we’ve done, shame involves our feelings about who we are. Guilt is, “I’ve done a bad thing,” but shame is, “I am a bad thing.” Shame makes us feel unworthy of love, and afraid to take chances. We fear the loss of connection to others; if people knew the horrible truth about us, we worry, they wouldn’t want us. But in order to make a true connection, we must let our true selves be seen, make ourselves vulnerable. From a practical standpoint, we have to display our deepest, darkest, stickiest, most potentially shameful shelves in order to find the others who share our desires. In order to connect, we must risk. 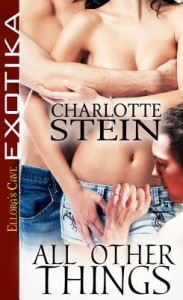 This tension is pretty much at the core of every romance ever written. What’s different lately, or at least it seems so to me, is the growing number of romances—erotic romances in particular, though not exclusively—that are willing to make this conflict explicit. They go there. They soak in it. And then they somehow turn it into something else. Case in point: All Other Things (I could’ve used any number of Charlotte’s books as examples). The premise is simple enough: wife knows she should be content with awesomesauce-but-vanilla husband; wife harbors shame-inducing lust for edgy coworker; awesomesauce husband is secretly IMing edgy coworker; eventual kinky threesome ensues (obviously). But the events are almost unimportant, because the key factor in this book is feels, and the most important feel of all is that one where the character is mortified and aroused and doesn’t want to like what’s going on because she thinks she shouldn’t, but she really, really does, so much, even though she isn’t certain she likes who that makes her since it involves sex and also because threesome. And then it goes from them talking about how filthy it’s all going to be to being unbearably filthy and it’s all the most delicious thing imaginable.

The characters think about and express their shame, spelling out the part it plays in the menage so that it’s almost as if the wonkiness of their sexuality is a fourth participant in the affair. And for all it’s a dark book, there’s an odd cheeriness in the delight the characters end up experiencing. Yes, it’s dirty, but once they reach a certain point, they’re gamboling and wriggling in the dirtiness like frisky, overexcited puppies. In effect, they’re fetishizing shame (which, in case this wasn’t clear, is awesome), which transforms it, and transforms how they view themselves. Their enthusiasm for how the shame itself makes them feel crowds out their previously held notions about whether wanting to engage in those shameful acts makes them bad people. At the end of the book they do still want to do those things…they just feel differently about what those things mean.

It becomes a story about how we wrestle with our shame. How it is possible, maybe even necessary, to make that struggle explicit in order to transcend shame. How we come to terms with—come to accept and embrace—what our desires and needs do or do not say about us. 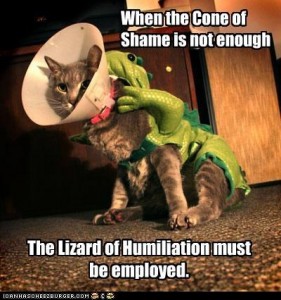 Once I started to think about this use of shame in modern romance writing, I couldn’t stop thinking of examples, most of them from the last decade or so  (not necessarily just contemporary romance or erotic romance – Sherry Thomas and Courtney Milan, about whose historicals I’ve often flailed here, both excel at exploring how characters mediate their own shame). And how different these books are, how much more willing to explore and ultimately accept potential ugliness in protagonists, than the standard “shameful-act-is-shameful-and-must-be-atoned-for-before-love-is-earned” model of so, so many romance books that have gone before and will surely come after. This may seem harshly realistic, a quality we don’t always associate with romance, because in the real world shame works this way. It doesn’t usually lead to atonement and true love…in reality we are going to continue googling for XXX-rated Harry Potter Giant Squid stories even if we do find love, so instead of feeling like we’re bad people for enjoying weird stuff, it makes sense to find love with somebody whose response to that tendency is, “Filch/Squid is my  OTP! Mah fic recs, let me show u them!” But in a way it’s also deeply romantic, this notion that we can find a love who not only loves us for ourself but embraces what we might otherwise think of as the worst in ourselves. Maybe it’s the new romantic.

On the other hand, maybe all this means that love is really just an acute form of confirmation bias? Perhaps that has always been true. I have no idea. Feel free to discuss amongst yourselves.

Gosh, and I didn’t even get to naked Fassbender (amusing, and NSFW). I could have also said many things here about shame and the collected works of Cara McKenna, by the way, or discussed Ruthie’s instant wonko/shame classic, About Last Night, but I’d rather gather recs. What’s your favorite work of horribly delicious piping-hot shame?

Areas of wonkery: geek culture, kink/BDSM, science for those who are not mathematically inclined, educational psychology. Read more >
View all posts by Delphine Dryden →
This entry was posted in Recommendations Needed, Talking Wonkomance, Thinky, Writing Wonkomance. Bookmark the permalink.