I have a secret. Until I was 22, I hated beards. Hated them like some kids hate clowns. (I know. I know. How could I?)

The story of the time I screamed bloody murder at the sight of my bearded uncle (and refused to even look at him for the rest of his visit) is the stuff of family legend. It’s one of those stories that gets told so often you feel like you remember it yourself, but you can’t possibly because you were way too young. 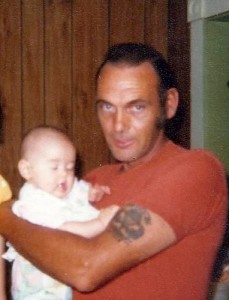 Anyway. My uncle didn’t just have a beard. He had a big, bushy, mountain man beard. THE HORROR. Uncle Tom felt terrible that he’d frightened me and spent the rest of our visit trying to make friends. Toddler-Me would have none of it.

Eventually my aunt and uncle divorced—I assume it had nothing to do with his beard—and I lost track of him, but not my beard loathing.

Bewhiskered uncles, scruffy strangers, Santa Claus…they all received the same treatment. If not abject fear, at least the cold shoulder. No beard was safe.

Conversely, I was obsessed with shaving. That’s the other story trotted out at holiday dinners and family barbeques. Toddler-Me stumbling out of the bathroom with my upper lip nearly sliced off, grinning through a face-full of blood, lisping “Shabin. Shabin.”

I continued to dislike beards well into my teens. There was less screaming, but they still made my skin crawl. Ugh, beards. Scraggly and so gross. As if.

Except, suddenly, one day they weren’t so gross anymore. More accurately, one beard in particular wasn’t so gross.

It was the summer of 2002 and I, struck dumb by real life insta-lust, had fallen hard for a bearded man. How could this be? As Mary Ann would say, my lust was confused. HE HAD A BEARD. And I liked it. WHAT?

Soon-to-be-hubs didn’t have a little sexy stubble, or a neatly trimmed goatee. He had a full on grizzly. All my uncomfortable feelings where beards were concerned were turning into fascination. Preoccupation. Oh, scratchy kisses. I wanted them. Maybe.

I thought, perhaps, my attraction to him as a person was so great it overcame my beard-hate. He’d received a special dispensation for extreme awesomeness. But, when he showed up for work clean-shaven, a good three months into my crush, I knew this was not so. Disappointed—bereft, even—I missed that manly face-pelt.

He’d grown it back by the time we went on our first date in September, much to my delight.

Now, I can’t even remember what that fear and loathing felt like. It exists in my memory like those oft-repeated stories, hazy and non-specific. From phobia to philia, it was such a lusty hate.

This entry was posted in Life & Wonk. Bookmark the permalink.

22 Responses to Beards: A Love Story