I thought I was writing a contemporary romance until the hero pressed the heroine against her office door and fingered her while her administrative assistant worked less than ten feet away. Then I realize it was actually an erotic romance. Not because there was anything particularly kinky about the scene, other than the danger of being caught and the possibility of being observed, but because the heroine’s character arc was absolutely and completely tied to her experience of sex. There was no way she could have had the set of realizations she needed to have without engaging in messy, semi-public sex with this particular, complicated hero. And by extension, there is no way I can tell her story, no way I can convince you of what she has learned and how deeply tied in it is to her as a character, without showing you exactly what happened between them. 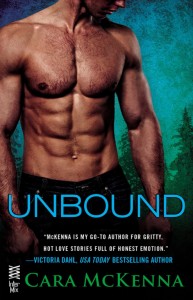 I pointed to Cara McKenna’s Unbound, which is one of the best books I’ve ever read about how this doesn’t have to be true. Unbound contains an extremely compelling argument (to borrow language from a discourse recently elevated by Mary Ann Rivers here and Ruthie Knox here and here) that loving someone who needs a physical object or act to get off doesn’t have to diminish the intimacy or intensity of the love. And this makes intuitive sense to me, because the kind of love we care about as romance writers and readers already puts an object and an act between us and the beloved—the body, and sex. And it shouldn’t matter how much more complicated you make this body or this act, how thoroughly you tattoo it, how you restrain it or bind it, what fantasies you introduce, how you flirt with what is social unacceptable or even (some would argue) legally dubious—what matters is the nature of the love and the way the body becomes a vehicle for its expression.

Writing romance, for me, is about exploring exactly that place where those things bleed over into each other.