They Didn’t Work Out, But Man Was the Sex Hot

While this isn’t meant as a promo post, I want to talk about the fact that I just agreed to write a sort of bonus Desert Dogs novella, Drive It Deep, to come out next summer between books two and three—Give It All and Burn It Up. This is very exciting to me, but not just because it’s a new contract and a cool opportunity. No, it’s exciting because of what I get to write about. 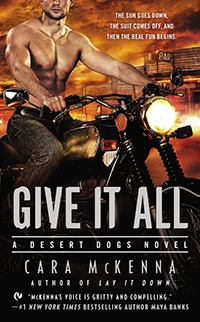 If you haven’t read Lay It Down, it doesn’t matter. All you need to know is that there are three particular characters among the group with some tension. A woman—whom I will call Trashy Bar Owner—used to sleep with a man I’ll call Frustrated Cowboy, before ultimately shacking up with another man, whom I’ll call Batshit-Crazy Lawyer. In Give It All, Trashy Bar Owner and Batshit-Crazy Lawyer fall in love, and Frustrated Cowboy is displeased…but is also man enough to realize he needs to get over Trashy Bar Owner and move the fuck on already.

But then, thanks to the publishing powers that be, after all that has gone down, readers will also get to read about Trashy Bar Owner and Frustrated Cowboy, and all the hot sex they had two summers back, well before Batshit-Crazy Lawyer ever showed up on the scene.

Think about that. Readers watch the heroine and her hero fall in love and have their HEA (or as close as I ever get to those.) Then they get to read about that heroine with her ex. An ex with whom she had amazing sex. And they didn’t break up because he turned out to be an asshole, or she caught him cheating on her. In fact—and this isn’t a spoiler—she dumped him because he wanted marriage and children, and she didn’t. He was a good guy, and a good lay, and she broke his heart. (She’s also slept with more people than either of these men, I ought to add, and has no qualms about that fact. She didn’t realize it was true love with Batshit-Crazy Lawyer because he gave her her first orgasm—she’d had plenty of those already, with plenty of other people. In fact, she coerces him into his first-ever blowjob and it explodes his brain.)

Anyhow, back to her and her ex, and this novella.

I think it’s kind of awesome, that Penguin’s happy for me to do this. To show a romance heroine’s past sexual relationship in a positive light, trusting that the fact that she’s had satisfying sex with a man other than her eventual hero doesn’t call into question anyone’s worthiness, or the validity of either relationship. In fact, I’m certain the reason they want me to write this is because there’s something about the tension still lingering between Trashy Bar Owner and Frustrated Cowboy in those first two books that they’d like to see more of, even knowing she winds up with another man. In a genre populated by more than a few Evil Exes, I’m delighted by this. This heroine gets to have an ex she loved, if briefly, and burned like a wildfire with—not some controlling asshat she caught boning her best friend, or who sucked in bed. If you asked her why that relationship failed, she’d tell you it didn’t—it simply ended. The wedding-bells-or-it-doesn’t-count mindset does not compute with this heroine.

Plus, why shouldn’t a heroine have a good man for an ex? A decent human being capable of giving her orgasms? Why give her exes that any old kinda-okay guy could stand next to and look like a dreamboat simply by contrast? Why shouldn’t the man she winds up with in the end have a fucking high-ass bar to clear, in order to find himself beside her?

I’m just so excited by this, I can’t even tell you.

Cara McKenna writes smart erotica—sexy stories with depth. Read more >
View all posts by Cara McKenna →
This entry was posted in Thinky, Writing Wonkomance and tagged Cara McKenna, Desert Dogs, Drive It Deep, feminism, Give It All. Bookmark the permalink.

6 Responses to They Didn’t Work Out, But Man Was the Sex Hot