a tongue twister, bi-erasure, and some gifs

Please excuse me while I engage in some shameless self-promotion. Last week, Amber and I finished our second collaboration. Let’s pause for some honey badger dancing. Feel free to fire the glitter cannon.

It’s another round of raunchy rollicking rock stars (say that three times fast!) filled with some of my favorite things.

It is totally spicy. But between all the boning, it’s also sorta-kinda an issue book. Maybe. If you squint. Like, it’s possible I may have referred to it as “the bi book” on more than one occasion. So, AJ’s post on Tuesday really resonated. You should go read that if you haven’t already. (Why haven’t you?) She says lots of thinky things about orientation and self-definition and the intersection of sexuality with love/lust/friendship. I nodded my head as I read it and then I talked about one of my favorite lines from One Kiss in the comments: 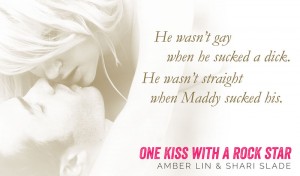 Here’s what I had to say: On the surface it’s very much about sex acts and using/not-using them to define sexuality. But it’s also about railing against a binary, against erasure, against having sexuality dictated. (*snort* Dick-tated.) Because orientation can be endlessly complex…a lifetime of searching and questioning and exploring…but it can also be dead effing simple. And maybe sometimes, that simplicity is the hardest to understand.

And yes, it is possible for a male bodied person to be gay while engaging in sexual activity with a female bodied person (see above where orientation is NOT dictated by sex acts) but that isn’t what caused the confusion here. And it’s also possible that we didn’t set it up enough…but it seemed pretty simple to me. They’re bisexual. Which I guess is hard to believe in or accept? No, that can’t be right. Oh, wait…

Krist and Madeline like what they like. Mostly they like each other, except for when they don’t. Their attraction (and its opposite) doesn’t have anything to do with gender. It’s about respect (or lack thereof), appreciation, admiration, and hot back alley smooching. Their sexuality isn’t a choice, a phase, or a trend. Their angst isn’t about navigating the interiority of their desires, it’s about navigating the media’s (mis)perceptions.

I really enjoyed the challenge of tip-toeing through the minefield of Krist’s ultra-masculine rocker world and Maddy’s hyper-sexualized pop arena. And by tip-toeing I mean blithely blundering and frantically groping.

You’ll be able to buy One Kiss with a Rock Star in early November. For now you can add it on GoodReads.

This entry was posted in Shameless Self-Promotion. Bookmark the permalink.

7 Responses to a tongue twister, bi-erasure, and some gifs