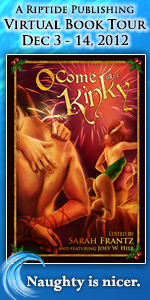 Thank you for joining us on the O Come All Ye Kinky virtual book tour! Leave a comment on the post below by December 16 and you’ll be entered to win one heck of a stocking stuffer—a $100 gift card to The Stockroom, where kinky dreams come true!

I discovered kink when I was a kid. I remember the first fantasies I had after watching prison movies when I was about 10ish. I’d lie in bed afterwards and imagine being in prison and having things done to me. As I got older this progressed to using props from around the house like stacks of books to put myself on display for imaginary men. I discovered nifty archive in due time, read all of the authoritarian section (and there’s a lot of dirty stuff in there), and only through the years realized that I did, in fact, have a kink for humiliation and D/s, and what that meant compared to one for pain or S/M, and just how slim the line is from the best turn-on to the stronger turn-off when it comes to such emotionally-driven tightrope play.

Since then I’ve picked up and put down BDSM books because invariably they’ll be about slave fantasies (of which I enjoy certain parts), slavery universes, dungeons and paddles and whips and crops and handcuffs and torture, and meanwhile the things I like are always only the small, nearly accidental side effects of other play. Bondage leading to being exposed and having a bit of almost too cruel dirty talk makes it just right, cross-dressing with the make-up smudged just enough to play at being used and being used good, CBT with the dom pressing the guy’s legs down to the bed and telling him to keep them there as he taunts him about it, begging puppies, drinking piss, and plain standing in the corner naked. They all share the same underlying current of hot humiliation, but with the grand majority of them the moment of a cuddle afterwards, the end of a scene, or just the progression towards something more on the S/M side of the acronym happens all too quickly.

Humiliation in erotica appears fleeting and occasionally—probably not even intended most of the time. Finding well-written erotica that goes there and stays there and doesn’t retreat to the safety of taking it all back (there’s nothing worse than reading a humiliation scene, getting into it and then have it end in the dom apologizing) is really really hard.

When I started writing “Open Return” for O Come All Ye Kinky I knew I’d write D/s and I knew I’d try to include at least a little humiliation and show it in the context of the acceptance and the love necessary to play happily and healthily in that kink sandbox. Without having to take it back.

I understand that if it’s not a kink you have it’s one of the bigger turn-offs in a sex scene. It can be harder to stomach than pain play, because that doesn’t challenge the emotional balance of the reader in quite the same way. But I hope that even readers who don’t share the kink won’t be put off by it in the context of the relationship portrayed in the story.

And I mean it, recommendations for things I should read very welcome.

Here’s the blurb for my story, “Open Return.”
Fifteen years ago, Zach left the small Midwestern town he grew up in, confused and scared and determined to figure out who he was. Now transformed, he’s drawn back by the memory and promise of the dominant couple he left behind. Laura and Scott are still together, and as the year draws to a close, they explore old feelings and new ones as they discover they’ve all been waiting for Zach to come home.

You can find out more about the anthology and all the stories here. 20% of all proceeds from O Come All Ye Kinky will be donated to the Domestic Violence Project of the National Leather Association–International. (If you buy the book, digital or print, from Riptide’s website, more money goes to the charity because we’re not paying third-party vendor fees.)