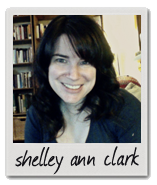 Shelley Ann Clark’s third-grade teacher told her once that she’d be the next Danielle Steel. It probably says something about her that, at age eight, she knew who that was and thought it was a compliment. Shelley now holds an MA in Creative Writing, a Masters of Library and Information Science, and has worked in public libraries for twelve years.

A Southerner by birth, Shelley lives with her husband in Chicago, where she writes about hot Southern men and the strong women who bring them to their knees.