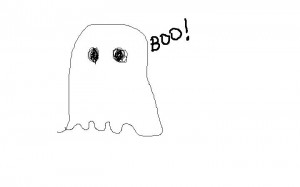 I drew this all by myself.

The first rule of horror movies is that I cannot watch them in the theatre unless I am surrounded by at least five or six very good friends. Said friends usually bring me to a horror movie as a way of diffusing the tension of the movie, using me as a form of additional entertainment adjacent to the movie itself–a carnival sideshow, if you will. They do this because I am a relatively anxious person to begin with, and I have what my therapist husband calls an “exaggerated startle response.” Basically, this means I jump or screech or otherwise make a total fool of myself during the big scare moments in a horror movie, which makes my friends feel relief, because then they can laugh at me instead of feeling afraid.

The second rule of horror movies is that I prefer not to watch them in the theatre at all, but in the comfort of someone’s home, in a pile of blankets and people and pets. I’m okay with turning the lights off for added creep-factor, but I never ever watch them alone.

The third rule of horror movies is that I really only want to watch them around Halloween, which is the socially acceptable and culturally sanctioned time of year for All Things Scary.  We’re taught from childhood that it’s safe to feel afraid at Halloween, because it’s all pretend, and life will go back to normal on November 1st.

Basically, then, it’s delicious to feel a little bit scared when you also feel safe. It’s not so delicious to feel scared when you feel genuinely terrified. My tendency to easily feel terrified is why I have so many rules about when and where and how I can watch a horror movie; otherwise, the experience is too overwhelming, and that’s even knowing that it’s only onscreen, knowing that it can’t actually hurt me.

In my day job as a librarian, I work in a neighborhood that is known for its crime levels. When I first began working in this neighborhood, I tried hard to make no assumptions about the area, the residents, or my library patrons, but there was a constant background buzz in my ears: “Be careful, don’t get shot, don’t get mugged.” In order to do my job and do my job well, I cannot allow myself to feel afraid, so I just don’t. I don’t have the luxury of fear. Instead, I go about my days in a sort of willfully stubborn cloud of ignorance about my surroundings, and I get angry whenever that haze is pierced. When my patrons tell me to be careful or warn me that it’s unsafe to walk to the El stop after dark, I know they’re just looking out for me, but they’re forcing me to feel that fear that I can’t let inside if I’m going to function. I am not safe enough to let myself be afraid.

This October, about two weeks ago, a group of us who contribute to this blog went to Door County, Wisconsin for a few days to write. Writing was the excuse, but the real reason, maybe, had to do with spending time with some like-minded women– fellow writers, yes, but writers who write about love and sex, who share an ethos, to a degree, or a vision of sorts; writers who have held our hands both literally and metaphorically; writers who have read our work and said, “Oh! I love this, and here’s how you can do it even better. . .”

I am a new writer. Maybe not a new writer, since I’ve been writing since I had the fine muscle dexterity to hold a pencil, and I have enough academic credentials to say that somewhere along the way, someone either thought I had learned enough to pass a writing class or thought I was too big a pain in the ass to keep around for another semester. But I am new to the notion of being a published writer, certainly, and I’ve only taken the smallest of steps forward toward that goal. So far, I’ve been happy, excited, proud, of those steps.

Until, during this wonderful retreat, I found myself sitting on the couch between two good friends, staring out the window at the lake, crying, and I couldn’t figure out why.

One of my friends once told me that publishing is like riding in a hot air balloon while people shoot at you, which sounds about right. Utter, pants-pissing terror combined with really beautiful views.

But I hadn’t been letting myself feel the fear, because it wasn’t safe to feel the fear. The scary monster felt way too real, until that moment, surrounded by a whole bunch of love and support, and even though it was pretty humiliating at the time to be completely unable to answer anyone’s questions about why I was crying (“I don’t know! And I can’t stop!”), suddenly I was safe enough to feel it. The hot air balloon wasn’t going to crash.

Though I still won’t be watching any horror movies by myself.

This entry was posted in Holidays, Life & Wonk. Bookmark the permalink.