The Rise and Fall of Radiation Canary: A Guest Post by Geonn Cannon

Hey, everyone! Audra here. I am so excited to welcome guest poster Geonn Cannon today! I recently had the immense pleasure of reading one of his works–The Rise and Fall of Radiation Canary–and within a few chapters I knew I absolutely had to recommend this book to everyone. It is such a gorgeous, women-positive work, and he delivers the story with the perfect blend of humor and poetry. Not to mention the kickass song lyrics. Geonn graciously agreed to guest post today about his work, and I would urge everyone to read the book and love it as much as I do. So here he is…Geonn Cannon!

One of the biggest problems writers have is finding the time to write all the stories they want to tell. It might have a character you really want to share with the world, or it might just be an idea that hasn’t been done before and you want to be the first to feel out its nooks and crannies. We all have stories like that, which are just banging at the walls of our subconscious wondering when their turn will be. Too many great ideas and not enough time.

A slightly less common problem is being saddled with a story you don’t want to tell. It could be any of a half dozen reasons that keeps us from putting pen to paper. My example is when a friend of mine shared a song she loved and casually said, “You should write a novel about a singer! That would be cool!” I had no interest in that idea, but another thing authors have in common is that we can’t just leave a plot bunny by the side of the road. We’ll pick it up, brush it off, and put it in the trunk just in case we get desperate one day. That was what I did with this nugget of an idea.

My friend was persistent. She didn’t bring it up every time we spoke, but it became a part of our interactions. “When are you going to write a story about a rock star? Are you still thinking about that singer story?” The truth was no, not really. I had it filed away as her story and I knew that if I ever did write the darn thing, it would be specifically for her. Not for me, not for my other fans. Heck, I might not even publish it. I would just write something and send it to her and that would be one bunny down.

Finally one day I decided the time had come. I had figured out who the central characters would be – I decided there would be more room to explore if I made it a band, and the band was named “Radiation Canary” after a line from 30 Rock – and I had a vague idea of what story I wanted to tell. I started writing and, to my surprise, it started to form seemingly without effort. I was able to take several elements I’d always wanted to use in a story (Karen’s virginity, for instance) and finally found a place for them. I was able to write a character who ends the story without a significant romantic entanglement and showing that she was absolutely fine with that. Not every happy-ever-after ends with two people strolling into the sunset. These four characters, the four characters I’d fought a whole year not to write, were suddenly embodying everything I’d always wanted to put in a book.

It’s easy to write the stories we want to write. We’re fond of them and we go to great lengths to craft them just right. We live and breathe with them and we put that care on the page. There’s a fear of “I can’t screw this up” so we go the extra mile to make sure it’s absolutely perfect before we show it to anyone. With stories we don’t want to write, the freedom is different. We’re less precious about them and more willing to experiment. With Radiation Canary I did things I would never have done in another book. I had one character cheat on her girlfriend. I didn’t plot out relationships ahead of time so that when one character started to fall for another, it felt natural and authentic rather than forced. I even threw out the idea of chapters, instead separating the novel into “albums” with sections labeled as “tracks.”

One of my delaying tactics on the novel was that I said I wanted to write all the lyrics beforehand so I could just plug them in without slowing down the actual writing. I kept going round and round, and when I finally did start I didn’t have any of the songs ready. To my surprise, when I got to the first instance where I needed the lyrics, they came as fluidly as the dialogue. For once, instead of putting all the pieces together before I started constructing the puzzle, I had to wait for the picture to start drawing itself.

We can avoid stories for any number of reasons. We can be afraid of their themes, we can think it’s an uninteresting or unoriginal idea, or we might just not know what we have on our hands. I fought Radiation Canary tooth and nail and only gave in when I couldn’t fight it anymore. What I got in return was one of my personal favorite story, not to mention one of my best-received novels. I’m insanely proud of this novel, and I’m terrified of how I would have screwed it up if I had gotten out in front of myself.

Wanting to write a story can make something precious. But being dragged kicking and screaming into a plot you don’t think you want can open doors you never thought about going through. It can help you knock off your old familiar tricks and explore a whole different world. You never know what you’re going to find. 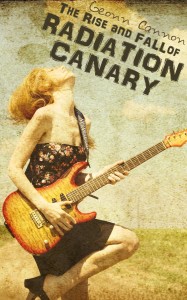 The Rise and Fall of Radiation Canary
Karen Everett isn’t looking to join a band the day she loses her notebook of poetry. She plays the cello and is unsure about what she wants in life, but she’s pretty sure it doesn’t involve being a professional musician. But a crush on the band’s beautiful lead singer Lana Kent, along with the desire to have her poetry shared with a larger audience, leads her to throw caution to the wind and play an audition that leads to her being invited to join the band at gigs.

After a spur of the moment decision lands them a spot on national television, Karen and the band find themselves riding an unexpected wave of popularity. Soon they’re touring the country, recording albums, making music videos, and trying to find time to have a personal life amid all the craziness. Aware that their surge in popularity is due to a fortuitous combination of popular trends and knowing they only have a few good years before their celebrity begins to wane, the ladies of Radiation Canary strive to make the most of their time in the spotlight before the public moves on.

With one eye on the inevitable end of their fame even as their popularity hits its peak, the band learns that it’s not how high you fly, it’s how gracefully you fall.

About Geonn Cannon
Geonn Cannon was born in a barn and raised to know better than that. He was born and raised in Oklahoma where he’s been enslaved by a series of cats, dogs, two birds and one unexpected turtle. Geonn was inspired to create the fictional Squire’s Isle after a 2004 trip to San Juan Island in Washington State. His first novel set on the island, On the Air, was written almost as a side project to another story he wanted to tell. Reception to the story was so strong that the original story was put on the back burner to deal with the world created in On the Air. His second novel set in the same universe, Gemini, was also very well received and went on to win the Golden Crown Literary Society Award for Best Novel, Dramatic/General Fiction. Geonn was the first male author to receive the honor. Geonn is currently working on a tie-in novel to the television series Stargate SG-1, and a script for a webseries version of Riley Parra.

This entry was posted in Guest Post and tagged behind the band, geonn cannon, lesbian fiction, rise and fall of radiation canary, romance, women positive. Bookmark the permalink.

8 Responses to The Rise and Fall of Radiation Canary: A Guest Post by Geonn Cannon