The Champion of Wonk: Editor Carolyn Nichols and Loveswept

In Serena Bell’s recent, excellent interview with Theresa Weir, Theresa said in answer to a question about her favorite “offbeat/thinky/champion-of-the-wounded romance writers”:

Back in the day, I really loved Loveswept authors and loved what was going on at Bantam’s Loveswept. Editor Carolyn Nichols founded the line, and those books were a breath of fresh air. (I never wrote for Loveswept, but I wrote for Bantam.) I really think Loveswept changed the landscape of romance. They removed the boundaries. They encouraged writers to color outside the lines. The books were fresh and fun and fast and daring. In fact, if any editor could be considered a champion of wonk, it would be Carolyn Nichols. Loveswept invited authors to push the boundaries. To completely ignore the boundaries. 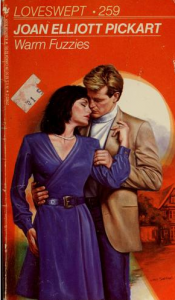 Well, of course I was immediately intrigued. For several reasons. First, I’m an editor, so I liked the idea of finding out more about this editor who was a “champion of wonk.” What did she do, and how did she do it? Tell me more!

Second, I’m a historian. The fact that I was six years old when the first Loveswept was published in 1983 served only to make the whole topic more intriguing. The history of romance wonk — how could I resist its siren call?

And third, I have a large, smooshy soft spot for Loveswept, because (a) the revived Loveswept line is now publishing my books (duh), and (b) the first romance novel I ever read was a Loveswept. And it was wonked. (See: my post on Joan Elliott Pickart’s Warm Fuzzies, a romance novel about a wounded football player who talks to a six-foot-tall blue stuffed teddy bear.)

Then, as if by kismet, Sarah of Smart Bitches, Trashy Books put together a visual tribute to Loveswept covers of the past that is not simply hilarious but also sublime. Go look, seriously. There are unicorns. I’ll wait. 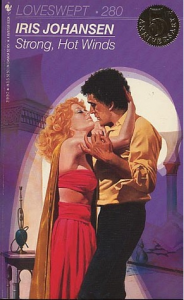 A quick scan of the Romancewiki tells us that Loveswept published 917 titles between 1983 and 1999. The first one, by Sandra Brown, had a hero whose touch “ignited fireworks that lit up the heavens and shamed the star-streaked Long Island skies.” Those are some touches! I’ve never seen Long Island blush so fetchingly before.

Loveswept no. 4 had a Native American heroine, which I thought was cool until I realized that Loveswept no. 7 — enticingly titled A Tryst with Mr. Lincoln — had a heroine named “Jiggs O’Malley.” Jiggs! What you’ll want to know about Jiggs is that she had both a one-night stand AND amnesia. I am so going to find a used copy of that book.

And the wonkery went on. The heroine of Loveswept no. 10, Hard Drivin’ Man, owns a trucking company. Number 13, Tiger Lady, features “a mysterious lover courting [the heroine] on the office computer.” Said computer, considering the publication year of 1983, was probably the size of a Mack truck. It probably would have been easier for him to literally court her on the computer than to figure out all the DOS commands entailed by computer-text-based courtship. But none of these mere technological hurdles stopped Loveswept from pioneering the computer dating genre. “Who was this mysterious stranger,” the copy asked, “and how could he compete with the irresistible Larry Hart, who came to repair the computer and stayed to short-circuit her emotions?” How, indeed?

Sorry. I’ll stop now. I’m really not making fun. I’m celebrating. These books were irreverent and quirky. They were weird, they were wonked, and they were romantic. Also, for many years, they were wildly popular.

Deborah Smith, who wrote fifteen titles for Loveswept between 1987 and 1991, says that “fans adored the Loveswept line for its inventive plots and quirky humor.” She remembers, “Loveswept authors were encouraged to push the envelope, and we did. Comedy, intrigue, super-villains, psychics, ghosts, exotic settings, over-the-top plots, red-hot romance and then some—very little was out of bounds, as long as it was written with a passion for unforgettable characters and plots.”*

Karen Leabo (who now writes as Kara Lennox) published seven books with Loveswept. She says of the experience, “My Loveswept editors encouraged me to write books that reflected what was important to me, books that I really, really wanted to write. Finding a welcoming home for my quirky, out-of-the-box stories meant so much to me. I wrote action/adventure, paranormal and romantic suspense as well as the ever-popular cowboys, brides and babies. The freedom to write anything I wanted was exciting, and I still cherish those books as some of my best.”** 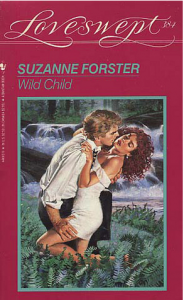 Wild Child, Or, Love among the Ferns

The Loveswept line allowed a glorious range of stories, from dark drama to wild comedy. Paranormal elements were acceptable, and so were sequels and series. I was able to do a little bit of everything in my 15 novels for the line. I had a woman who communicated psychically with animals, a heroine who could heal with her touch, an Amer-Asian hero whose background hinted that he’d been a victim of sexual abuse; a hero who was a justice of the peace while growing some kind of weird mushrooms on the side, for his famous barbecue sauce. I had a Scottish heroine who kidnapped an American millionaire and held him hostage, and a heroine who battled a genius psycho who planned a terrorist attack using a killer herbicide.

A lot of these books couldn’t have been published anywhere but Loveswept. Karen Leabo underscores this point: “I wrote a heavy-duty paranormal romance for Loveswept before that was popular; my other publisher wouldn’t have touched it at the time.” 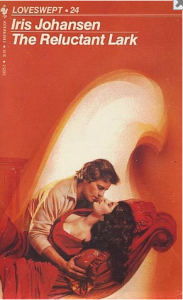 And, as Theresa Weir points out, the reason this haven for wonkomance existed at all was Carolyn Nichols.

Deb worked with Nichols, and she remembers how the editor shaped her work:

I loved working with Carolyn and feel that she taught me more about writing than any other editor I’ve known. She was very willing to take risks, and yet she could tell an author exactly where to tweak an emotion, description or mood, so that the bizarre became charmingly eccentric and the crude became edgy and sexy. She was a master of fine-tuned editing skills. I’ve always told people that Carolyn could transform a book with a list of deceptively ordinary revisions. She made it very easy to polish a book, and she taught me a lot about editing. To this day, when I’m editing one of the authors my small press publishes, I try to work the way Carolyn did — picking out specific but crucial elements and telling the author precisely what to change. She was a genius.

Kara suggests that Nichols’s legacy persisted at Loveswept long after she left:

I didn’t work directly with Ms. Nichols. But I felt her continued influence, and I was never told to pull anything back or tone anything down. Loveswept was always known as an “author driven” line. Unique voices and quirky stories were welcome. 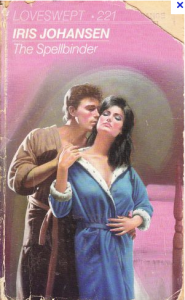 Both have robes, but only one is a witch. I think.

So . . . a wildly successful, author-driven, quirky, variety-indulging line of category romance. Is there any possible response but a hearty Huzzah?

I asked Deb and Kara if, when they look at today’s romance-publishing landscape, they see a field that’s more open to wonkomance, or whether they think the conventions have hardened in the past few decades.

I’m not up to date on what’s being published by the major romance houses, but I do know that here at Bell Bridge [Books] we often get projects that were rejected by the Big 6 pubs for being too edgy. And by “too edgy” I don’t mean way out in left field, I mean they just don’t conform to a narrow standard of romance storytelling. So I’m assuming that the rules of romance publishers have not strayed far from the ol’ tried and true. The good news is that diverse perspectives ARE reaching a receptive audience now, thanks to small presses like Bell Bridge and also to opportunities for authors to publish their own work.

I think the landscape is far more open than it ever was. With the growing popularity of e-books, there’s more room for “niche” writers who can still make a profit for themselves and their publishers with fewer copies sold than in the past. There seems to be a place for everyone and an audience to be found.

An uplifting message for the forces of wonk!

And yet . . . I can’t help but wonder what, exactly, has changed? Why is what was once mainstream now “niche”? I understand that publishing has shifted tremendously, and I’m grateful for the advent of e-publishing and all it has done to open up the field for wonk. But if romance readers of the 1980s and 1990s were happily scarfing down this creative, author-driven line — in large enough numbers to keep the imprint going strong through nine hundred titles — well, what happened?

Huge thanks to Deborah Smith and Karen Leabo / Kara Lennox for their help with this post! Deb Smith’s Loveswept title Legends — in which the heroine kidnaps a billionaire and holds him hostage — is now available in e-book. Kara Lennox’s Outside the Law is a March Superromance release. Her Loveswept novel Callie’s Cowboy will be rereleased in August 2012.

17 Responses to The Champion of Wonk: Editor Carolyn Nichols and Loveswept